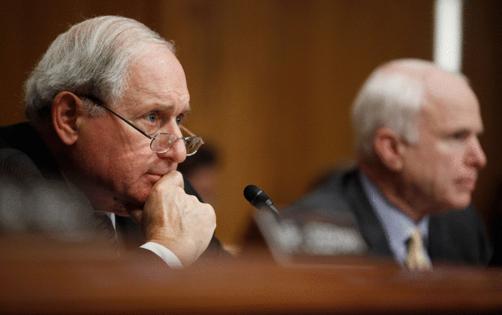 The death was announced late Thursday by his namesake, the Levin Center at Wayne State University Law School, where he was chairman and a distinguished legislator in residence.

The cause of death was not immediately known, but Levin had been receiving treatment for lung cancer.

Levin, Michigan's first Jewish senator, served 36 years in the upper chamber starting in 1979 as a supporter of Detroit's automakers, defender of the Great Lakes, and a champion of tax fairness and ethics reform.

Never tainted by scandal, the Detroit Democrat was called "Mr. Integrity" by now-Senate Majority Leader Chuck Schumer, D-N.Y., when he retired in 2015.

He is survived by his wife, Barbara Halpern-Levin, three daughters and six grandchildren.

As a member and longtime chairman of the high-profile Armed Service Committee, Levin earned a reputation for targeting Defense Department waste and cost overruns, while advocating for Michigan's military families and bases.

As chairman, he ordered the 2007-08 investigation by the committee into the abuse of detainees in U.S. military custody that found officials at the top of the Bush administration bore blame for the use of harsh interrogation techniques.

"One of the adages is PSI goes after lions, not fleas," said Elise Bean, who worked for Levin on three subcommittees including as staff director and chief counsel of PSI.

COLUMBIA, S.C. — As misinformation spreads about the anti-parasitic drug ivermectin — which has not been approved as a viable treatment for COVID-19 — calls to the Palmetto Poison Center about the medication have ...Read More

CHICAGO — Chicago area doctors are pleading with parents not to bring their kids to hospital emergency rooms unless necessary, saying that an unusual surge in respiratory illnesses is flooding ERs with children and ...Read More