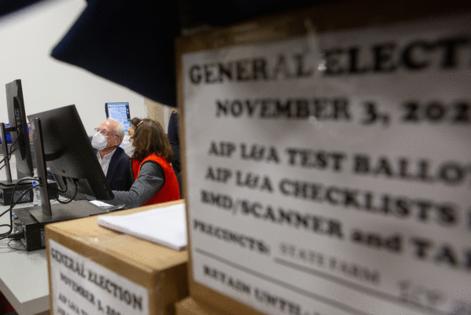 Republicans say they are trying to protect Fulton's voters from the county's decades of elections mismanagement. Democrats view this effort as a hostile takeover to alter elections results.

Fulton Commission Chairman Robb Pitts wrote a letter to Fulton's legislative delegation leaders Thursday asking them to hold a hearing "to ascertain the legitimacy of this request."

"It is my ultimate fear that this request performance review could be occurring for political reasons and that Fulton County's voters will be the ones who bear the cost," Pitts wrote.

Gabe Sterling, COO with the secretary of state's office, pushed back on that accusation at an Atlanta Press Club event Thursday.

"The reality of it is not the state Legislature can come in and overturn results, and that's what many people on the left side of the spectrum have said about the law," Sterling said. "It's simply not true."

Secretary of State Brad Raffensperger said Fulton has been "failing" at elections since 1993 and now Georgia has a method to ensure fair elections.

The next steps are unclear because this process has never been executed.

SB 202 is one of many pieces of legislation created after the 2020 election that allows legislators more control over elections management, said Jessica Marsden, counsel for Protect Democracy, a nonprofit that works to protect elections from partisanship.