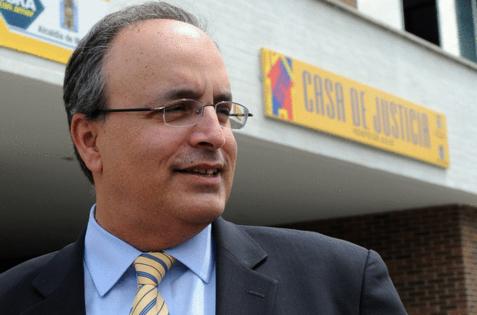 WASHINGTON — President Joe Biden picked Florida International University professor Frank Mora as his nominee for U.S. ambassador to the Organization of American States on Thursday, putting a prominent South Florida campaign surrogate into a key Latin America diplomatic post at a crucial time for the region.

Mora, a Cuban-American Democrat who previously served as a deputy assistant secretary of defense for the Western Hemisphere under President Barack Obama, would be the second consecutive Miami resident to hold the post. Former Republican state Rep. Carlos Trujillo served as President Donald Trump’s OAS ambassador from 2018 to 2021.

If confirmed, Mora would be a key administration official tasked with responding to mass pro-democracy protests in Cuba, the aftermath of a presidential assassination in Haiti, continuing crackdowns on political opponents in Nicaragua and U.S. opposition to Nicolas Maduro’s leadership in Venezuela.

“I think the fact that they made this appointment so quickly and made this announcement at this particular moment shows the importance of Latin America,” said former Miami Democratic Rep. Debbie Mucarsel-Powell, the first member of Congress born in South America who campaigned with Mora during the 2020 election. “I think Frank has a very clear understanding of the needs of the region as it pertains to how the United States can actually support the fight for democracy.”

The OAS is an international organization of 35 member states in North and South America and the Caribbean with the purpose of promoting democracy and security in the Western Hemisphere.

Mora, who did not respond to a request for comment, would need to be confirmed by the Senate Foreign Relations Committee before getting approval from the entire Senate.

In his past role as a Biden campaign surrogate during the 2020 election, Mora frequently attacked South Florida Republicans and promoted the Biden campaign on Spanish-language television. Biden ultimately performed poorly in South Florida with Cuban-American voters and non-Cuban Hispanics, which contributed to his 3.3% loss statewide to Trump in 2020.

In a 2016 op-ed, Mora argued that Cuba policy pre-Obama “was based on a false premise — that the U.S. had leverage over Cuba.”

“The entire policy was premised on the unfounded, disproven and misguided belief that Havana would commit political suicide (i.e. allow for democratic elections, political parties, free press, etc.) in exchange for normalization of diplomatic relations and lifting of the economic embargo,” Mora wrote in an op-ed that was published after Trump’s election but before he undid most of Obama’s Cuba policy changes.

While Trujillo faced questions on his legislative record as a Republican state representative but was ultimately confirmed on a unanimous voice vote, Mora’s views on Cuba are different than the top two lawmakers on the Foreign Relations Committee, New Jersey Democratic Sen. Bob Menendez and Florida Republican Sen. Marco Rubio.

Menendez and Rubio, who are both Cuban-American, did not support Obama’s engagement with Cuba and have urged Biden to do more in response to the anti-regime protests that broke out in Cuba on July 11th.

Democrats could ultimately confirm Mora without GOP support, but Rubio previously blasted Mora’s inclusion on Biden’s transition team after the election, telling the Washington Free Beacon “personnel is policy, and no U.S. administration should ever return to a policy of appeasement with Raúl Castro and his crony, Miguel Díaz-Canel.”

Menendez and Rubio did not immediately respond to a request for comment on Mora’s nomination.

But Mucarsel-Powell said the timing of Mora’s appointment, about three months faster than Trujillo’s appointment in October 2017, shows voters in Miami that Latin America is a priority for the administration.

“We all know that we have been a hub for trade, commerce and finance with Latin America and many people refer to Miami as the capital for Latin America and that’s true,” Mucarsel-Powell said. “I think that is why I believe the Biden administration understands it has to be someone from this area who understands these relationships and can provide proper advisement to the White House.”

MODESTO, Calif. — Britta Foster and Minerva Tiznado are in different leagues as far as health care is concerned.

Foster, who married into the family that owns the $2.5 billion Foster Farms chicken company, has Blue ...Read More

POPLAR, Mont. — When Maria Vega was a senior in high school in 2015, she found the body of one of her closest friends, who had died by suicide. A few days later, devastated by the loss, Vega tried to take her own life.

For the past 18 months, while I was undergoing intensive physical therapy and many neurological tests after a complicated head injury, my friends would point to a silver lining: “Now you’ll be able to write about your ...Read More

Senate Democrats released the details of a proposed levy on billionaires, a new and logistically risky approach to taxation that lawmakers hope will help fund President Joe Biden’s social spending aimed at low- and ...Read More