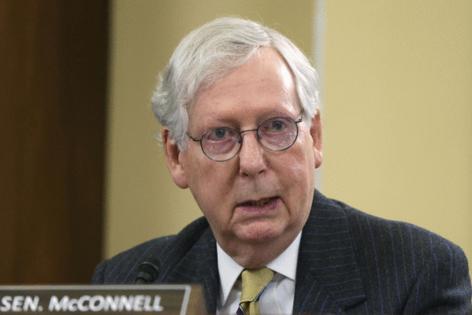 LEXINGTON, Ky. — U.S. Sen. Mitch McConnell is running ads encouraging Kentuckians to get the COVID-19 vaccination as the delta variant is causing a fourth surge of COVID-19 cases in the state.

The ads were purchased by McConnell's Senate Campaign Committee and will air on 100 radio stations in Kentucky.

"Not enough people are vaccinated," said McConnell told Reuters, who first reported the ads. "So we're trying to get them to reconsider and get back on the path to get us to some level of herd immunity."

In the 60-second ad, obtained by the Lexington Herald-Leader, McConnell draws on his experience with polio as a boy, which he contracted before the polio vaccine was invented in 1953.

"This time, thanks to American investment and ingenuity — and especially thanks to the tireless work of our scientists, doctors and health care heroes — it took less than a year for us to develop three highly-effective COVID vaccines," McConnell says. "It's nothing short of a modern medical miracle. Every American should take advantage of this miracle, and get vaccinated."

For around a year, McConnell has been traveling the state first praising the effort to develop a vaccine quickly and then urging Kentuckians to take it. The 79-year-old Kentuckian is a polio survivor and has consistently followed COVID-19 precautions throughout the pandemic, even as some members of his party have denounced the public health experts steering the country's response to the virus.

A partisan divide has emerged over the vaccine, where Republicans — particularly Republican men — have expressed skepticism about the vaccine and have refused to take it. That skepticism has played a role as the virus has ripped through some of the southern states where vaccine hesitancy is at its highest, like Kentucky, where around 51% of the state has received at least one dose, according to the Kentucky Department of Public Health.

"I'm a Republican man and I would like to say to everyone, you need to take the vaccine," McConnell said at the University of Kentucky in April. "Because the only way I think we can finally put this pandemic in the rearview mirror is through herd immunity."

When McConnell made those comments, COVID-19 cases and hospitalizations were dropping steadily in Kentucky. Now they're on the upswing. Hospitalization numbers are similar to those in March, before the vaccine was widely available, and case totals are on track to increase for the fifth week in a row.

It is unclear how much of an effect McConnell's ads will have on the vaccination effort. His message is complicated by his fellow Senator, Rand Paul, who has been critical of experts like Dr. Anthony Fauci and has only urged people to get vaccinated if they feel at risk of a severe case of the virus.

In the meantime, Gov. Andy Beshear has recommended masks in school settings and has reimposed mask requirements for state workers and visitors at the Kentucky Capitol.