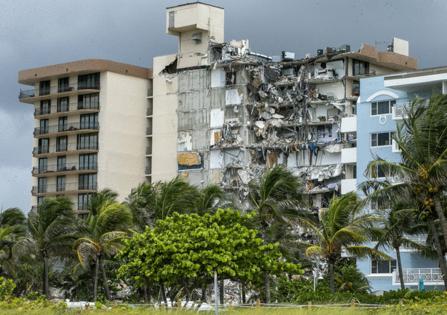 MIAMI — Surfside police opened an investigation after building records potentially holding clues about the Champlain Towers South collapse appeared to go missing from the town’s rented storage facility, according to a police report obtained by the Miami Herald.

Police focused their inquiry on former building official Ross Prieto, who was criticized in the wake of the collapse after records showed he told residents the building was in good shape in 2018, despite reviewing an engineering report detailing major structural damage.

Prieto “may have recently entered the storage facility where the town stores building records,” investigators wrote in the report. The document provides no details on which specific records went missing from storage or why Prieto was listed as the sole subject of the investigation. As of July 8, investigators had interviewed at least nine town officials, but not Prieto himself.

Prieto did not respond to the Herald’s request for comment.

Surfside Police Chief Julio Yero told the Herald on Thursday that Prieto came under suspicion because he had access to the storage units in Sunny Isles Beach, which were still listed under his name despite his leaving the town’s staff. But Yero said there was “no specific indication that he did go there inappropriately whatsoever.”

Details of the investigation — including summaries of the interviews with town officials — were contained in two draft word processing documents attached to July 8 emails from Detective Andres Mendoza and Detective Sgt. Marian Cruz, obtained as part of a records request by the Herald. One draft was labeled “with corrections” and featured a few highlighted additions.

Yero, the police chief, told the Herald the draft had “a lot of mistakes” and that “the term inactive is not correct.” He said detectives are still reviewing surveillance footage from the storage facility.

“You really have to pretend you didn’t see that, because it’s a work in progress,” Yero said, referring to the six-page report. He added, “You have a document that is almost writing a disposition, when we’re not done with the case.”

Surfside Mayor Charles Burkett told the Herald on Thursday morning that he wasn’t aware of the investigation. But Eliana Salzhauer, a town commissioner, said town officials informed her within a couple days of the collapse that there were concerns about who had been at the storage facility.