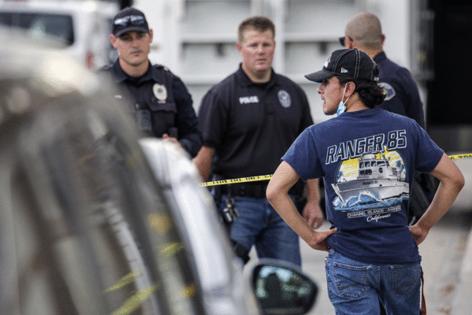 Amid a surge in shootings this year, a majority of California voters say that they believe gun control laws are effective in reducing violent crime, but confidence in them has slipped, according to a new University of California, Berkeley Institute of Governmental Studies poll co-sponsored by the Los Angeles Times.

The poll released Thursday found that 56% of the state's voters surveyed believe stronger laws restricting the sale and possession of guns help make their communities safer, but the number is down from 60% who felt that way three years ago.

The poll also found that 57% of California voters say it is more important to place greater controls on gun ownership than it is to protect Americans' rights to own guns under the Second Amendment, but that number is down from 64% who felt that way in 2018.

The decline in confidence in gun laws is a response to what people are seeing in their communities, said Mark DiCamillo, director of the Berkeley IGS Poll.

"I think it's due in large measure to the increase in crime, especially violent crime," DiCamillo said. "But still, this is a very Democratic and very liberal constituency and gun control laws have traditionally been quite popular among those voters not only here in California but nationwide."

The poll was released at a time when key gun laws in California are being challenged in the courts by groups advocating for gun rights including the Firearms Policy Coalition.

Last month, California appealed a federal court decision that overturned the state's ban on assault weapons after a judge ruled it is unconstitutional. The ban remains in effect during the appeal process.

The poll found 56% of California voters don't believe that the assault weapons ban law violates the U.S. Constitution, which DiCamillo noted is consistent with the level of support for strong controls on gun ownership.

The poll numbers on the constitutionality of the assault weapon ban are not relevant to what is now a legal matter to be settled by the courts, according to Sam Paredes, the executive director of Gun Owners of California.

"Opinion doesn't matter when it comes to constitutional rights," he said.