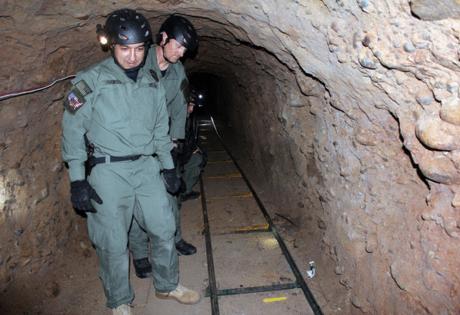 SAN DIEGO — The tunnel linking a Tijuana warehouse to another in Otay Mesa was equipped with a hydraulic elevator, electric rail cars, lighting, wooden floors and a storeroom.

The subterranean passage discovered in 2011 was designed to secretly move tons of marijuana north — a feat of engineering that U.S. authorities would later marvel at as the "most elaborate smuggling tunnel" to be uncovered along the U.S.-Mexico border at the time.

It was the work of Jose Sanchez Villalobos, one of the Sinaloa cartel's high-level managers, whose efforts continued to raise the profile on drug kingpin Joaquín "El Chapo" Guzmán's obsession with underground routes.

On Wednesday, Sanchez was sentenced in San Diego federal court to 10 years and one month in custody for a drug-distribution conspiracy — just over the 10-year minimum mandatory sentence.

In a plea agreement in December, Sanchez admitted to planning, financing and supervising the construction of "multiple" cross-border tunnels from 2010 to 2012, as well as overseeing their operation as smuggling conduits.

During the hearing, U.S. District Court Judge Michael Anello acknowledged Sanchez's "very sophisticated criminal conduct at a very high level" but also noted he was "a totally different man today than when the conduct was committed."

Sanchez, 58, has already served most of his prison term. Since his arrest in Mexico in 2012, he has spent about eight years in custody there and another year and a half in San Diego after being extradited to face charges in the U.S. With good behavior credits, he is likely due to be released within a few months.

According to a sentencing memorandum prepared by his defense attorney, Sanchez was born in Atequiza, Jalisco, and worked as a child on his family's farm with 10 siblings.

He immigrated to Los Angeles in his early 20s, staying for the next two decades. He returned to Guadalajara in 2005.

The documents don't reveal how Sanchez became entangled with the Sinaloa cartel or rose to become one of Guzman's tunnel architects. He was known by a string of nicknames — Quirino, Garanon, El Gato, El Viejo, Primo, Grenudo — which at times confounded investigators trying to learn his identity, according to a 2015 article in The New Yorker.