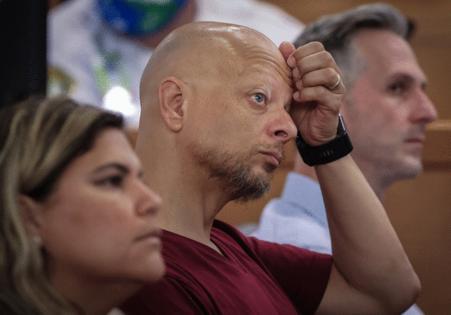 MIAMI — A month after Champlain Towers South in Surfside collapsed on June 24, survivors who have been living in hotels and temporary apartments are now facing a pressing question: Where will they live after their homes were leveled?

Oren Cytrynbaum, a self-employed real estate agent, was a resident of Champlain Towers South. He’d left his apartment at around 10 p.m. on June 23 and was not in the building when it collapsed shortly after 1 a.m. In the last month, he’s suffered with anxiety and survivor’s guilt.

On Monday, Miami-Dade police identified the 98th victim who died in the collapse, Estelle Hedaya.

‘Everybody in Miami knows somebody from that building’

Before real estate, Cytrynbaum worked as an attorney and is still licensed and has spent much of his time in the past month helping his neighbors navigate courts and legal issues. He’s also become deeply involved with aid organizations that are helping survivors — all of which has meant that he has no income.

While residents expect compensation from insurance and lawsuits, those can take months or years to settle. Surfside survivors, however, need housing now.

What we’ll remember: What we lost in the Surfside catastrophe and how it changed us

Cytrynbaum has been aided by the Global Empowerment Mission, or GEM, a disaster relief nonprofit based in Doral. On Wednesday, they launched their third and final phase for helping Surfside victims: Working to find them permanent homes.

They’ve partnered with real estate firm Douglas Elliman, whose agents will work pro bono to help around 35 families find a new home. With funds from donations to GEM’s Champlain Tower Residents Fund, survivors from the collapse will be provided with first and last month’s rent as well as their security deposit. They hope to raise enough money to also help with continued rent assistance.

“I’m self-employed and I’ve spent all my time in the last month dealing with this,” Cytrynbaum said in an interview. “It’s not just about replacing what we lost, it’s about having the means to support ourselves financially while we deal with all this.”

“There’s a gap period,” he said of the time after emergency relief, “That’s usually when things start to go wrong,” he said, stressing that the organization seeks to provide the victims with sustainable relief from the disaster.

Susana Rodriguez, a Champlain Towers resident who was spending the night at her mother’s house when the building collapsed, said that she has to leave the Red Cross-funded hotel she’s been staying in by Friday.

“We need relief money now,” she said, frustrated by bureaucratic delays from other relief efforts. “I need a roof over my head.”

GEM has collected $370,000 in donations for victims so far. Their first phase provided initial relief that included Visa and Walmart gift cards for victims to buy basic goods like clothes and toiletries in the immediate aftermath, as well as computer and reimbursement for families’ travel to Miami. The second phase put families in temporary apartments.

Liora Rahimi, a Realtor associate with Douglas Elliman, is helping victims find their new homes. She estimates around 95% of survivors are planning to rent, but that people are looking far and wide for new places.

“A lot of people want to get away from Surfside, others want contact with the area they called home — it’s a real mix,” she said, adding that it’s a difficult time to be looking for a place, with rentals in short supply and increasingly rising rents.

Cytrynbaum said that he’d like to stay in the Surfside/Bal Harbour/Miami Beach area, where he’s lived for 20 years. And before living in the area, his family had a vacation apartment there.

Donations can be made to GEM’s Champlain Tower Residents Fund at www.globalempowermentmission.org/mission/surfside-tower-collapse.