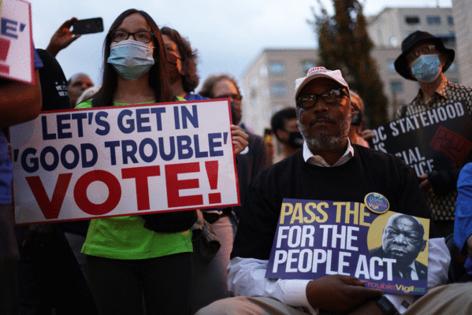 WASHINGTON — Democrats’ increasing focus on defeating Republicans in next year’s midterm elections as the best way to push voting rights forward is angering progressive activists and civil rights leaders, who say the strategy risks backfiring and overlooks the need for immediate action.

The disagreement is the latest example of the growing rift between the Biden administration and its allies over how to respond to a wave of new GOP-backed voter restrictions they say will make it harder for minorities to vote.

“You lose elections, that’s what’s next,” said civil rights attorney Bakari Sellers. “You can’t take the voters who literally have not just voted for you, but died for these rights and not care about them or put their various issues at the forefront. The belief that somehow we’re just going to out-organize voter suppression is disappointing at best, asinine at worst.”

The White House says it is continuing, first and foremost, to press lawmakers to pass federal voting reforms.

But President Joe Biden has refused to tell Democrats they should change the rules of the U.S. Senate to allow voting rights legislation to pass over the objection of Republicans. Supporters of the new voting rights measures want him to make more frequent use of his bully pulpit.

“We need this federal legislation now,” said Lisa Cylar Barrett, the NAACP Legal Defense Fund’s director of policy. “Waiting a number of years is certainly not an option.”

If the voting rights reforms Democrats want to see become law are enacted after the midterm elections, they wouldn’t be implemented in states until 2023 at the earliest. And that would happen only if Democrats stay in full control of Congress after the election, a historically rare feat for the incumbent president’s party.

Progressive activists are warning that without greater prioritization of voting rights issues, Black voter turnout could be low in the next election.

Of particular frustration for activists were Biden’s comments during a CNN town hall last week, when he suggested Democratic voters could still turn out en masse to the ballot box next year, in spite of new restrictions on voting access.

FIGHT OVER THE FILIBUSTER

Democrats say that division over the filibuster — a Senate procedural hurdle that requires a supermajority of at least 60 votes to pass certain legislation — has left the political apparatus of the party with little choice but to mobilize around an effort to oust the Republicans resisting greater federal control.

“The DNC is making the investments necessary to register, educate, and protect voters,” said DNC spokesman Daniel Wessel. “And we will continue to mobilize voters to fight back against Republicans’ disgraceful voter suppression efforts and hold them accountable at the ballot box.”

But critics of that strategy say the rising emphasis on campaign-style efforts like registering voters and building on-the-ground outreach ignores investments in organizing and party building that Democrats already make and say there is little more the committee can do to boost participation.

They also argue that the approach undermines what they view as an urgent need to pass new laws this year.

“The idea that if Black voters in the South would just organize a little bit better, we could fix this, it’s insulting,” said Meagan Hatcher-Mays, director of democracy policy at the grassroots progressive group Indivisible.

Indivisible’s leadership has been among the most outspoken in its criticism of Biden’s handling of voting rights, arguing Biden is endangering his legacy if he continues to prioritize infrastructure investments over changes to voting laws.

Their frustration with Biden is only growing, Hatcher-Mays said. “The most well-turned-out election ever resulted in a 50-50 split in the Senate,” she said, referring to 2020. “I don’t know what else the White House is looking for.”

House Majority Leader Steny Hoyer told McClatchy this week that he is pushing to bring the John Lewis Voting Rights Advancement Act to the floor in early September. He said voting rights bills are “critically important” and Democrats want to pass new legislation “this fall, if we can.”

In the Senate, Democratic efforts to pass voting rights legislation have been stymied since June, when a different voting rights bill the party was pushing failed to overcome a filibuster in the face of unified GOP opposition. The legislation, known as the For The People Act, would curb partisan gerrymandering and set federal standards for voter registration and voting access, among other provisions.

Democrats have vowed to continue pressing for the bill, but party leaders acknowledge that passing it through Congress will be difficult unless they change the filibuster rules.

And at least two Senate Democrats, centrists Joe Manchin of West Virginia and Kyrsten Sinema of Arizona, have repeatedly stated their opposition to ending the filibuster. Biden himself said ending the procedural move would throw the legislative process into “chaos” during last week’s town hall.

Civil rights leaders say the rule change is essential and have made their views clear during discussions with the White House.

“The strategy is not working until they pass the law,” said Melanie Campbell, president and CEO of the National Coalition on Black Civic Participation. “It can’t be process over the people.”

Campbell helped to organize a strategy session between Black women who support voting reforms and White House officials earlier this month. Vice President Kamala Harris conducted most of the meeting, but participants said Biden made a surprise drop-in to greet the women, several of whom had been arrested that week at a Capitol protest over Congress’ failure to pass the law.

Civil rights activists say they will continue to push lawmakers, who are currently immersed in infrastructure and budget talks, to take up voting rights legislation again.

“It is critical that we get something done before the end of this year,” said Democratic strategist Karen Finney, who attended the White House meeting. “I’m optimistic that Congress understands and that the American people will be part of pressuring Congress.”

Republicans say their voting rights bills in the states are designed to increase confidence in the security of voters’ ballots.

“The federal government should not be writing the entire nation’s election laws,” Honest Elections executive director Jason Snead said of Democratic efforts. “But it is doubly problematic when you are opening the door to criticism that you are writing these laws to make it easier for you to win elections.”

Progressive activists and Democratic strategists say the party should tap into voting rights as a wedge issue to drive up enthusiasm among the party’s base for the 2022 midterms. But they also warn that those efforts might not be as successful as some party leaders hope.

The rift has amounted to the most serious divide between the White House and allied activists in the first six months of Biden’s administration, even if polls show that the president retains strong support from Democratic voters overall.

David Pepper, the former chairman of the Ohio Democratic Party, said every dollar spent on helping overcome voter barriers is a dollar not spent running the rest of the campaign.

“Maybe in a state that has a razor-thin margin, you can do it,” Pepper said. “But I just think you’re going to put the onus back on activists and campaigns to fight illegal and blatant voter suppression. It’s a losing strategy long term.”