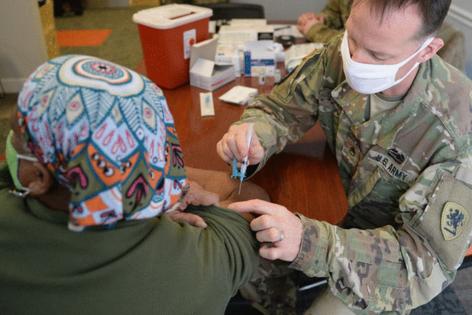 But state Attorney General Eric Schmitt sided with the council. Late Wednesday afternoon, he said he filed for a temporary restraining order against the county mandate.

"Page and (County Health Director Faisal) Khan's refusal to withdraw their Mask Mandate is an act of stunning defiance of state law," Schmitt said in his motion to block the mask order.

On Monday, in response to rising numbers of COVID-19 cases and hospitalizations, St. Louis and St. Louis County leaders reinstated mask requirements and were met with swift opposition.

The St. Louis County Council voted 5-2 on Tuesday to end the county's order. Council members rebuked Page for failing to consult them before issuing it, which they say was required under a new state law.

Page said Wednesday that the council had been appropriately notified and that the mask order didn't require council approval.

"I want to make it clear that a mask mandate remains in place in St. Louis County," Page said.

No court hearing had been set in response to Schmitt's lawsuit. Summonses were issued to defendants, but none had filed responses.

Despite the backlash, Page encouraged residents to wear masks in public and said he expects many people will do so, regardless of the council vote. The vast majority of residents, he said, just want to do what is safe.

"These cases, and this curve is shooting straight up," Page said. "If we don't make some decisions fast, we're going to be in a bad spot."

Page on Wednesday said the court will determine the status of the mask mandate, and "until then, the law stands."

On Tuesday, the U.S. Centers for Disease Control and Prevention updated its guidance to recommend that even vaccinated people return to wearing masks indoors in parts of the country with high or substantial transmission of COVID-19, defined by a case rate of at least 50 new cases per 100,000 residents over the past week.

According to CDC data, almost every county in Missouri meets that criteria. The only exceptions, as of Wednesday afternoon, were Scotland and Clark counties, in the northeast corner of the state, and Pemiscot County, in the southeast corner of Missouri.

Kansas City Mayor Quinton Lucas said Wednesday that he planned to reinstate an indoor mask mandate that will take effect Aug. 2 and last until at least Aug. 28. In light of the lawsuit challenging St. Louis and St. Louis County, Lucas said he planned to introduce a resolution to the city council that would support the mandate.

Meanwhile, the St. Louis region continued to have increases in COVID-19 cases. On Wednesday, St. Louis-area hospitals reported a total of 367 patients hospitalized with confirmed cases — a number not reached since Feb. 11.

The Illinois Department of Public Health on Tuesday afternoon recommended that everyone, including the fully vaccinated, wear a mask in public indoor settings in areas that have substantial and high transmission of the virus.

Herb Simmons, director of the St. Clair County Emergency Management Agency, said at a briefing Wednesday that people can get vaccinated without stepping out of their car at the health department's vaccination site, 330 West Main St. in Belleville.

"That's how quick this thing is spreading, again," Simmons said. "Tell your friends, tell your neighbors — it's not over with."

Dr. William Powderly, a professor of medicine at Washington University School of Medicine and director of the school's Division of Infectious Diseases, said masks are needed in the St. Louis region because not enough people have been vaccinated and a lot of virus is circulating in the community.

The delta variant of the coronavirus, which accounts for most cases in the Midwest, is estimated to be about twice as contagious as the first variants that circulated in the U.S.

"The fundamental answer to this, to get us out of this mess, is to get everybody vaccinated," Powderly said. But, he added, "when you have that many people who are not being vaccinated and you have rampant spread of a virus ... what else can we do?"

In St. Louis County, which has one of the higher vaccination rates in the state, 52% of the population has received at least one dose, according to state data. In the city of St. Louis, the first-dose rate is 42% — the same level as southwest Missouri's Greene County, home to Springfield.

With 48% of the statewide population having at least one dose, Missouri lags behind the national rate of 57%, according to the CDC.

Dr. Steven Lawrence, a Washington University infectious disease specialist at Barnes-Jewish Hospital, said he understands people's frustration with masks, but the current levels of vaccination are not enough to keep the region's case rates from climbing. Mask mandates, he said, are less disruptive than social distancing requirements, or lockdowns.

"This is a surge," Lawrence said. "We are at a point where we need to act."

(Joel Currier of the Post-Dispatch contributed to this report.)