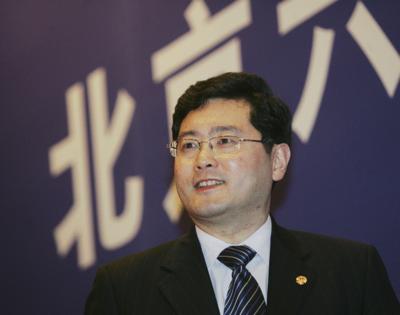 China dispatched a veteran diplomat known for pushing back against Western criticism to serve as its next ambassador to the U.S., an appointment that suggests Beijing is bracing for a period of prolonged tension with Washington.

Qin Gang, 55, who most recently served as vice foreign minister, arrived in the U.S. Wednesday to fill the post recently vacated by China’s long-time ambassador, Cui Tiankai, according to a statement posted by China’s embassy in Washington.

The first-time ambassador will instantly become Beijing’s most important overseas envoy. Qin will be responsible for shepherding relations between the world’s two largest economies as they lock horns on issues ranging from trade to technology, human rights and the South China Sea.

The announcement, which had been anticipated for months, comes days after a contentious round of talks between senior U.S. and Chinese diplomats. On Monday, Foreign Minister Wang Yi reiterated Beijing’s demands during a visit to Tianjin by Deputy Secretary of State Wendy Sherman, urging the U.S. to stop criticizing China’s political system, drop all sanctions and tariffs, and stay out of Hong Kong, Taiwan and Xinjiang affairs.

U.S. President Joe Biden still hasn’t installed an envoy in Beijing. Former Ambassador to NATO Nicholas Burns has been seen as a favorite for the post.

China’s relations with the West, and the U.S. in particular, have grown far more fraught since Beijing last named an envoy to Washington eight years ago. Some 76% of Americans said they viewed the world’s most populous nation unfavorably, up three percentage points from last year, according to a survey released earlier this month by the Pew Research Center.

Nevertheless, Chinese President Xi Jinping, who faces increasing domestic calls to stand up to foreign pressure, has signaled a willingness to maintain an assertive stance on the world stage. In a speech marking the 100th anniversary of the ruling Communist Party this month, Xi vowed that China “will never allow any foreign forces to bully, coerce and enslave us.”

Qin has long embraced the combative approach. In March, he led the Foreign Ministry’s response to European and U.K. sanctions over Xinjiang, summoning the British ambassador and condemning the move by Brussels.