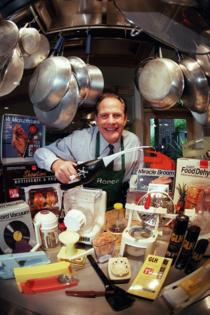 But wait — there’s no more.

Salesman, marketing visionary and inventor Ron Popeil wrapped up a colorful life Wednesday morning, according to TMZ, which reports that the 86-year-old Ronco founder died in a Los Angeles hospital after an unspecified medical emergency.

Known as well for his creative spirit as his ability to sell the items he sometimes made, Popeil is credited for introducing the world to the Pocket Fisherman, Mr. Microphone, Hair in a Can and Showtime Rotisserie & BBQ.

He made famous phrases like “But wait, there’s more” and “Set it, and forget it.”

In a 2006 interview with Forbes magazine, he discussed the secret to his success.

“The fact that I’m an inventor first and salesperson second is the reason why so many people buy my products,” he said. “If you create a product that’s needed in the marketplace, or a drug that will solve a medical problem, people are going to buy it. It’s so easy for me to sell my products because the market exists.”

The New York City native reportedly made $200 million through his ideas and referred to his inner-circle as “The Rontourage.”

He leaves behind a wife and four children.

MYRTLE BEACH, S.C. — On Monday, Leaders of the Horry County Republican Party gathered in the multipurpose room at the Base Recreation Center in Myrtle Beach for one of the local GOP’s monthly meetings.

The party has ...Read More

LOS ANGELES — Hate crimes increased by 35% in Orange County in 2020, the largest annual jump in at least a decade, according to a new report.

Hate-motivated attacks that did not rise to the level of a crime — known as...Read More