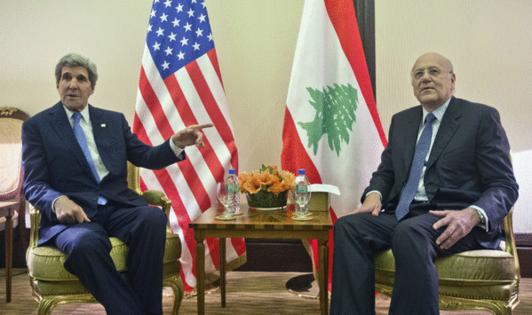 BEIRUT — Lebanon’s president tasked Najib Mikati, a billionaire businessman and former premier, with forming a new government, the third attempt in less than a year as the country scrambles to escape a spiraling economic crisis.

Mikati received 72 of 115 votes during consultations between President Michel Aoun and lawmakers on Monday. He had already won the backing of a group of former Sunni Muslim heavyweight politicians. They included Saad Hariri, who ended his own efforts to build an administration last week after disagreements with Aoun.

Critically, the Shiite Iran-backed Hezbollah group and its allies also gave their support to Mikati. Lawmakers belonging to two major Christian factions were among 42 parliamentarians who refrained from nominating a premier.

Speaking to reporters, Mikati said he wouldn’t have accepted the role without “the needed international guarantees,” adding his first priority once a Cabinet had been approved would be to pursue the so-called French initiative, a roadmap set by Paris to unlock billions of dollars in pledged donor funds. It’s time “for someone to stop the fire from spreading,” he said.

Lebanon has been under a caretaker cabinet since August when the government resigned in the aftermath of the massive port explosion that killed at least 200 people and destroyed swaths of the capital. The government, which defaulted on $30 billion in international debt over a year ago, has struggled to implement reforms given its limited authority and political backing. A collapse in the value of the pound has decimated the savings of millions of Lebanese, while shortages of fuel add to the misery.

Mikati, 65, is the cofounder along with his brother of investment firm M1 Group, and the two are Lebanon’s richest men with individual fortunes of around $2.5 billion. Their family-owned company has investments in sectors including telecommunications, real estate, aircraft financing, fashion and energy. M1 Group holds stakes in South African telecom firm MTN, fashion retailer Pepe Jeans and property in New York and London, according to Forbes magazine.

A two-time prime minister, he’s from the northern city of Tripoli, one of Lebanon’s poorest, and is considered to be a close friend of Bashar Al-Assad, the president of neighboring Syria and a former major power broker in Lebanon. Mikati entered politics in 1998 as a public works minister and is currently a lawmaker.

His most recent cabinet was in 2011 after Hezbollah and its allies toppled Saudi Arabia-backed Hariri and named him to form a government. Mikati resigned two years later over several disputes that pitted Hariri’s coalition against the Hezbollah-led camp.

Mikati has since re-aligned himself closer to Hariri, who also has ties France, the United Arab Emirates and Egypt.

The international community, primarily former colonial power France, has been pushing Lebanon’s fractious politicians to form a government quickly and begin implementing reforms that could unlock aid aid and revive stalled talks with the International Monetary Fund. Paris has threatened to sanction politicians who obstructed the formation of a government.

Nationwide protests erupted in October 2019 over falling living conditions with demonstrators demanding the removal of an entire political class that they accuse of rampant corruption, pillaging state coffers and pushing the country to the brink of collapse.

During the protest period, a state prosecutor accused Mikati and the country’s biggest bank of making illicit gains from a subsidized housing program. Both Mikati and the bank have denied any wrongdoing.

WASHINGTON — Australian Prime Minister Scott Morrison said he told the leaders of India and Japan in advance about a deal to purchase nuclear-powered submarines from the U.S., an announcement that blindsided and angered ...Read More

WASHINGTON — The last remaining Haitian migrants who were living in squalid conditions in makeshift encampments underneath a bridge in Del Rio, Texas, along the U.S.-Mexico border have been cleared out, the head of the ...Read More

The National Rifle Association’s board acted as a rubber stamp for longtime leader Wayne LaPierre, ignoring calls to independently probe allegations that he and other executives misused gun-rights group funds, one of its...Read More

VANCOUVER, Canada — A Canadian court scrapped a long-running extradition case against a top Huawei Technologies Co. executive on Friday, a major step toward resolving an unprecedented diplomatic tussle between the U.S., ...Read More