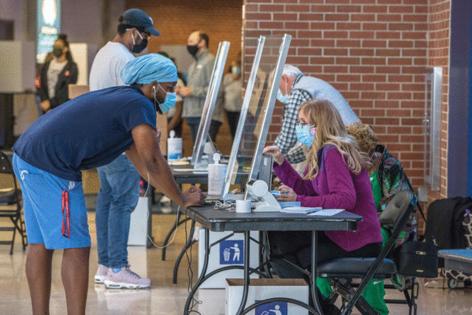 RALEIGH, N.C. — A North Carolina judge ruled Monday that a nearly two-year-old lawsuit by a coalition of media organizations against state election officials over records connected to a secretive Trump administration voter fraud probe can continue — at least for now.

The public origins of the case date back to the summer of 2018, when the U.S. Attorney's Office for the Eastern District of North Carolina dropped a set of sweeping subpoenas on state and county election boards demanding documents on every registered voter in the state going back years. Complying with the subpoenas would have required election officials to turn over millions of pages of records just days before the midterm election.

Amid pushback, the U.S. Attorney's Office quickly agreed to extend the deadline for production. But the demand also narrowed in scope with little explanation. Months later, the State Board of Elections quietly issued guidance to county boards to produce a much smaller trove of documents — this time focusing on about 800 specific voters.

Voter registration data is public in North Carolina. But when a reporter requested the documents that election officials eventually turned over to federal investigators, the state refused to release them.

They also refused to say why, noting they were "prohibited from providing a reason."

Agencies are required under North Carolina law to cite specific exemptions when denying requests for public records. So in September 2019, a coalition of media organizations, including The News & Observer, WRAL News and The Washington Post, filed suit against the State Board of Elections and their counterparts in Wake County, arguing they were "knowingly and intentionally" violating the state's open records law.

What followed was months of legal wrangling that eventually revealed a wide-reaching gag order surrounding the case, put in place by Chief U.S. District Judge Terrence Boyle. The federal judge also explicitly blocked disclosure of the records in the suit.

Secrecy around the federal probe largely persisted until March, when newly unsealed records of the grand jury investigation detailed a contentious legal battle between the U.S. Department of Justice and state officials, who sought to curtail a "dragnet" that would sweep up millions of North Carolina voters.

But with the federal investigation now largely closed and the judicial gag orders lifted for months, the State Board of Elections and the Wake County Board of Elections have still refused to turn over any registration data at issue in the media coalition lawsuit.

WASHINGTON — Australian Prime Minister Scott Morrison said he told the leaders of India and Japan in advance about a deal to purchase nuclear-powered submarines from the U.S., an announcement that blindsided and angered ...Read More

WASHINGTON — The last remaining Haitian migrants who were living in squalid conditions in makeshift encampments underneath a bridge in Del Rio, Texas, along the U.S.-Mexico border have been cleared out, the head of the ...Read More

The National Rifle Association’s board acted as a rubber stamp for longtime leader Wayne LaPierre, ignoring calls to independently probe allegations that he and other executives misused gun-rights group funds, one of its...Read More

VANCOUVER, Canada — A Canadian court scrapped a long-running extradition case against a top Huawei Technologies Co. executive on Friday, a major step toward resolving an unprecedented diplomatic tussle between the U.S., ...Read More