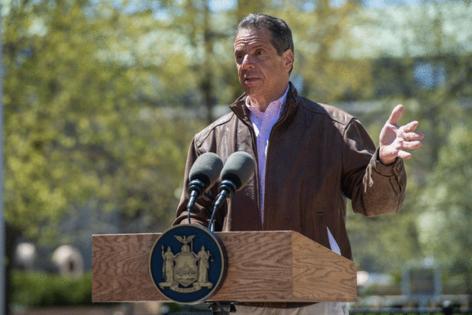 The governor grew combative Monday as he expressed “concerns as to the independence” of the attorneys tasked with reviewing claims of misconduct and predatory behavior made by nearly a dozen women, including current and former staffers.

“Look at who the independent investigators are,” Cuomo said during a COVID-19-focused event at Yankee Stadium. “Do a little history. Go to Google. Google the independent reviewers and tell me what you see.”

A pair of highly respected independent attorneys, Joon Kim and Anne Clark, were tasked by James’ office to run the investigation into Cuomo’s behavior after he reluctantly authorized a probe back in early March.

The governor is now questioning their motives and casting their work as some sort of political vendetta.

Kim is a former federal prosecutor who worked under former U.S. Attorney Preet Bharara as his office investigated Cuomo for shuttering the short-lived ethics panel known as the Moreland Commission.

It’s not immediately clear what prompted Cuomo to change his tone regarding the probe and go on the offensive. However, he was interviewed by investigators a little over a week ago.

The 63-year-old Democrat has repeatedly denied ever touching anyone “inappropriately” and initially apologized for making comments that may have been “misinterpreted as an unwanted flirtation.”

He has since publicly questioned the motives of his accusers, likened calls for his resignation to “cancel culture” and even attempted to redefine sexual harassment in state law.