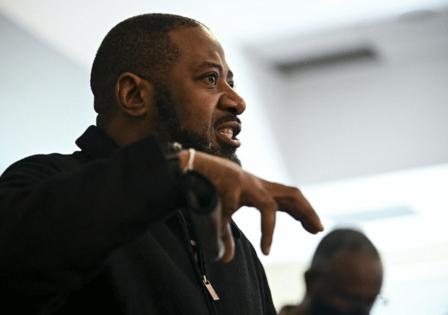 ST. PAUL, Minn. — Rep. John Thompson said Monday that he will not resign amid reports of previous domestic abuse allegations that his wife and a group of supporters denied in a news conference outside the State Capitol.

"If you're not careful, the oppressor will have you believe that they're the ones being oppressed," said Thompson, DFL-St. Paul. "One of the greatest quotes I've ever heard in my life is your life begins to end when you remain silent about things that matter the most. I will not remain silent. I will not be resigning."

Thompson's wife, who referred to herself as Lea Austin-Thompson but whose legal name is Aleatha, told reporters that they "no longer have the permission" to publish details about her and her family's life. But she then proceeded to discuss her reaction to recent news coverage on public records related to police calls that described multiple cases of alleged choking and punching by Thompson, at times in front of children, in three cities between 2003 and 2011.

"I am not now nor have ever been an abused woman," Austin said. "I am not a victim of domestic abuse. I'm not going to say that we didn't have any issues but we've worked on those things."

She later clarified that she did not recall the details of the cases as described in the incident reports first reported by Fox 9 earlier this month. The Star Tribune has since obtained the documents through public records requests.

News of the allegations, which stemmed from police calls in Superior, Wisconsin, Eagan and St. Paul, prompted Gov. Tim Walz and a deep cast of state DFL party leaders to join Republicans in calling for Thompson's resignation. After Thompson disputed the accuracy of the police reports this month, Walz told reporters that "I think it would be very unusual for three different police departments stretching over a decade to fabricate information."

Thompson declined to answer additional questions from reporters without his attorney present, whom he said was not in the state. Thompson is also expected to appear again before a House ethics committee at a date to be scheduled this week on an unrelated complaint filed by a House GOP member who said Thompson twice called him a racist during a June floor debate. Thompson asked the committee to postpone last Friday's hearing until he could have his lawyer join him.

Thompson's wife Monday that her husband offered to resign to spare her from appearing before reporters at the Capitol.

"What these people in this office are going to have to do is take Team Thompson from his office kicking and screaming and holding onto the desk," she said, gesturing to the Capitol building behind her. "We are not resigning. We are going to fight like we never fought before."

Monday's news conference was interrupted by a woman who drove onto the Capitol lawn honking her horn and waving a Trump flag. State troopers later took her into custody.