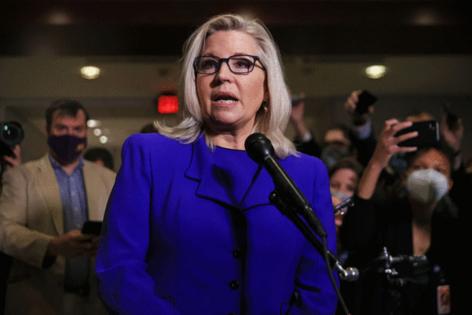 Rep. Liz Cheney, R-Wyo., Monday won a key speaking spot at the opening session of the congressional committee investigating the storming of the Capitol — and Republican leaders denounced her as a turncoat.

Cheney, the senior GOP lawmaker on the Democratic-led committee, will speak immediately after chairman Rep. Bennie Thompson, D-Miss., at the closely watched opening hearing of the controversial committee Tuesday.

That prime perch underlines Cheney’s power as the senior Republican lawmaker on the committee that will investigate the events of Jan. 6 when thousands of supporters of former President Donald Trump rampaged through the Capitol.

He branded the onetime ally and Rep. Adam Kinzinger, R-Ill., as “Pelosi Republicans,” a reference to the fact that they were appointed by House Speaker Nancy Pelosi. Cheney responded by calling McCarthy “pretty childish.”

“We have a lot of important work to do,” Cheney said before ducking into her congressional office.

Cheney has staked her political career on holding Trump and his acolytes accountable for the shocking Capitol attack, which was designed to prevent Congress from certifying President Joe Biden’s election win.

She was one of 10 Republicans who voted to impeach Trump and was ousted from her leadership role after she refused to tone down her criticism of Trump’s campaign of lies about the election.

The committee’s televised hearings will give Cheney the biggest bully pulpit yet as she seeks to build support among conservatives and Republicans for her #NeverTrump stance.