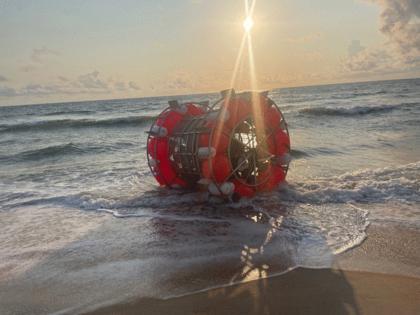 MIAMI — Seashells, plastic water bottles, the occasional flip-flop. Those are typical things you might find on a beach.

But a giant hamster wheel? Not so likely.

On Saturday morning, a Florida man was discovered inside a giant floating contraption, according to the Flagler County Sheriff’s Office, which posted pictures of the red machine washed up on shore.

The agency says “driver” Reza Baluchi was inside, unharmed. The 49-year-old told authorities he was attempting to raise money for charity by “running” on water from St. Augustine to New York City by way of Bermuda, but ran into some problems.

Baluchi and his hydropod, as he calls it, washed ashore near Hammock, in Flagler County, about 30 miles from where he first started the endeavor in St. Johns County.

Flagler County deputies said they arrived at the beach after several alarmed callers reported seeing the UFO, unidentified floating object. The hydropod is basically a metal cylinder with paddle wheels.

The long-distance runner told authorities he “came across some complications that brought him back to shore.”

The money Baluchi was trying to raise was to go to first responders, the kind that just got him out of his latest situation. The vessel is reportedly outfitted with GPS and enough food and water for days.

This is hardly the adventurer’s first brush with disaster: Baluchi made his first failed attempt in 2014, trying to get to travel north, before having to be rescued in the middle of the Atlantic Ocean at a cost of $144,000 to taxpayers.

His second attempt two years later also failed when he was stopped by the Coast Guard for safety reasons.

On his website, RunwithReza.org, he says future plans include meeting with world leaders to encourage “connectivity,” planting a tree as a “symbol of growing personal empowerment,” and creating a reality show.