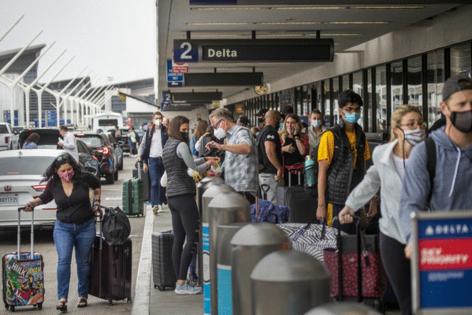 The U.S. has decided not to lift existing travel restrictions “at this point” because of the alarming surge of new COVID-19 cases nationwide and spread of the highly contagious delta variant, a White House official reportedly confirmed Monday.

The restrictions affect most non-U.S. citizens who have recently been to more than two dozen European countries, including the United Kingdom, as well as Brazil, China, India, Iran, South Africa and others.

“Given where we are today with the delta variant, the United States will maintain existing travel restrictions at this point,” the official told Reuters.

“Driven by the delta variant, cases are rising here at home, particularly among those who are unvaccinated and appear likely continue to increase in the weeks ahead,” the person said.

The U.S. Department of State did not immediately return a request for more information.

The decision comes as the nation faces a rise in new coronavirus infections, hospitalizations and deaths, a new pandemic wave largely driven by unvaccinated Americans. More than seven months after the U.S. vaccine rollout began, only half of the population is fully inoculated, according to the Centers for Disease Control and Prevention.

As many people refuse to get the potentially lifesaving shot, the deadly delta variant continues to spread, becoming the dominant strain in the country. The seven-day average of new cases confirmed in the U.S. over the past week was over 40,000, an increase of nearly 47% from the previous seven days, the latest CDC coronavirus report shows.

The travel restrictions were also likely to delay the nation’s economic recovery, dealing another blow to the tourism industry.

The rise in new cases recently led the U.S. to extend travel restrictions with its own neighbors. Federal officials last week announced that land and ferry crossings with Canada and Mexico would remain closed to nonessential travel at least until Aug. 21.