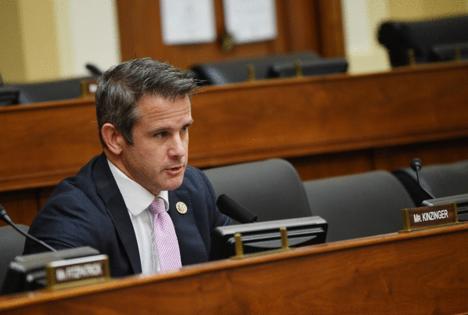 Kinzinger said he “humbly accepted” Pelosi’s request, adding that the investigation requires a “serious, clear-eyed, non-partisan approach.” He vowed to “work diligently to ensure we get to the truth and hold those responsible for the attack fully accountable.”

“For months, lies and conspiracy theories have been spread, threatening our self-governance. For months, I have said that the American people deserve transparency and truth on how and why thousands showed up to attack our democracy, and ultimately, what led to the insurrection,” Kinzinger said in a statement.

“Let me be clear, I’m a Republican dedicated to conservative values, but I swore an oath to uphold and defend the Constitution — and while this is not the position I expected to be in or sought out, when duty calls, I will always answer,” he said.

Pelosi revealed earlier Sunday on ABC’s “This Week” that she would be asking Kinzinger to join the panel, saying “he and other Republicans have expressed an interest to serve. The select committee is scheduled to begin its work Tuesday.

Kinzinger’s appointment comes after House GOP leader Kevin McCarthy pulled all five of his Republican members from what was supposed to be a 13-member panel after Pelosi vetoed two of them. She contended Republican Reps. Jim Jordan of Ohio and Jim Banks of Indiana could not render independent judgment because of their past statements and support for Trump.

Illinois Rep. Rodney Davis of was one of three other members McCarthy tapped to serve on the select committee. Davis, pondering a bid for governor, later labeled Pelosi’s committee a “sham” after McCarthy yanked his GOP members.

Kinzinger joins Republican Rep. Liz Cheney of Wyoming, who was originally picked by Pelosi, on the select committee. Cheney and Kinzinger were the only two House Republicans to support the Pelosi panel after Senate Republicans rejected a House-passed effort to create a bipartisan independent commission to look into the storming of the Capitol on Jan. 6 and Trump’s role in inspiring the attack.

Pelosi called Cheney “a very courageous member of Congress” as she criticized Republican attempts to portray the panel as leading a partisan investigation.

“I do believe that the work of this committee, in order to retain the confidence of the American people, must act in a way that has no partisanship, is all about patriotism,” Pelosi said.

“Republicans will say what they will say. Our select committee will seek the truth. It’s our patriotic duty to do so,” she said. “Maybe the Republicans can’t handle the truth.”