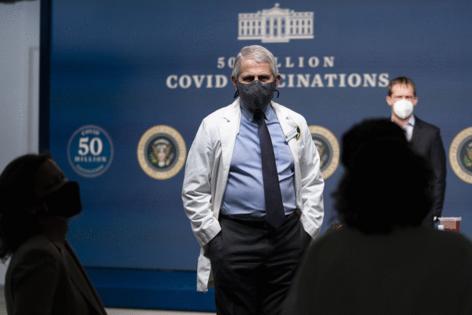 WASHINGTON — The U.S. is moving in the “wrong direction” in combating a new wave of COVID-19, and a booster vaccine shot may be needed especially for the most vulnerable, said Anthony Fauci, the nation’s top infectious disease expert.

With half of the country still not fully vaccinated, and with a new spread fueled by the highly contagious delta variant, the U.S. faces a worst-case scenario of daily deaths reaching 4,000, the same level as during last winter’s peak, Fauci said.

“I’m not sure if it would be the worst-case scenario but it’s not going to be good,” he said on CNN’s “State of the Union.” “We’re going in the wrong direction.”

He addressed the growing issue of “breakthrough infections,” when a person contracts COVID-19 despite being fully vaccinated, and the possible need for booster shots for those with suppressed immune systems such as cancer or transplant patients. The issue of a third shot was discussed on July 22 by the Advisory Committee on Immunization Practices, he said, which will continue to review the data that “might push us in that direction.”

Pfizer Inc.’s COVID-19 vaccine was just 39% effective in keeping people from getting infected by the contagious delta variant in Israel in recent weeks, according to Israel’s health ministry, but provided a strong shield against hospitalization and more severe forms of the virus. In Los Angeles County, those vaccinated made up 1 in 5 of the new infections in June.

“The data that’s evolving from Israel and from Pfizer indicates that it looks like there might be some diminution in protection,” he said. The vulnerable are most likely to be the first to get a booster shot, which he said “might likely happen.”

The U.S. will buy 200 million more doses of the Pfizer and BioNTech vaccine, meant for children under 12, who aren’t yet eligible, and also for boosters if data show they are necessary.

“It’s easier for this delta variant to overwhelm low antibody levels and that’s why we were considering whether or not some people might need boosters,” Scott Gottlieb, former Food and Drug Administration commissioner, said on CBS’ “Face the Nation” Sunday.

Fauci also defended the decisions by Los Angeles and St. Louis to reimpose mask orders regardless of vaccination status. Local governments have the discretion to assess and introduce rules that fit the situation on the ground, he said, adding that the cities’ actions aren’t incompatible to what the Centers for Disease Control and Prevention is recommending.

CDC Director Rochelle Walensky said July 22 that the organization was sticking with its recommendations that fully vaccinated people don’t usually need masks, though she added that wearing one may have some advantages. That came as a number of public health experts urged the CDC to recommend that even fully vaccinated people wear face masks in public amid the resurgence of virus cases fed by the delta variant.

Gov. Asa Hutchinson of Arkansas, which has one of the U.S.’ lowest rates of vaccination, said the state’s legislature will weigh in on any mask mandate, based on the data, as schools and other activities reopen, though he pointed that enforcement remains a challenge. The state’s push for more vaccinations remains its priority.

“This is a pivotal moment in our race against the COVID virus,” he said on the show. “It’s important for normalcy, and what’s holding us back is a low vaccination rate.”

Last week was the worst in the U.S. in three months as weekly cases surged fourfold from a month earlier as the delta variant pushed up cases in every state, but especially in those with lower vaccination rates.