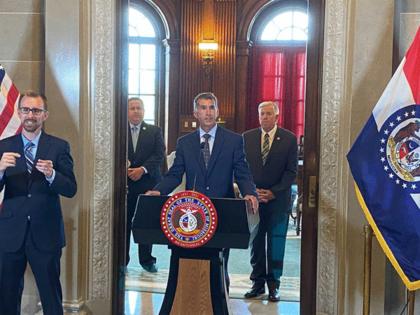 KANSAS CITY, Mo. — As Missouri continues to slog through the COVID-19 pandemic, health advocates hope Gov. Mike Parson’s appointment of an Illinois official to lead the Department of Health and Senior Services could be a new era for the state’s embattled public health system.

“I think you’ll see that whole department, that whole agency be rebuilt,” Parson said in April as he embarked on the search for a new director after asking Dr. Randall Williams to resign.

On Wednesday, he announced the appointment of Donald Kauerauf, a former Illinois public health official, who told reporters he wants Missouri to rank No. 1 in health outcomes. He said he wants to focus on getting Missourians back to preventative care, and addressing their social determinants of health — the environmental or socioeconomic factors that play a role in one’s risk of disease.

He’ll have his work cut out for him when he starts in September.

It also has one of the lowest rates of child vaccinations.

Health advocates point to a fragmented public health system for which Missouri frequently sits at the bottom of the nation in funding.

Health department staffing fell by 8% in the past decade, according to an Associated Press and Kaiser Health News investigation last year. And Missouri’s state dollars toward public health amounted to just $7 per person last year, according to the State Health Access Data Assistance Center affiliated with the University of Minnesota School of Public Health.

For years, medical organizations and health advocates have been putting together proposals to revamp the state’s public health system into one with minimum standards in areas such as chronic disease prevention and maternal and child health.

The state appears to be getting on board. Missouri officials are in the beginning stages of a “plan to make transformative investments” in the public health system, according to the health department. In an April meeting convened by Parson’s office, top state officials discussed using multiple federal grants to implement a “statewide long-term public health system concept.”