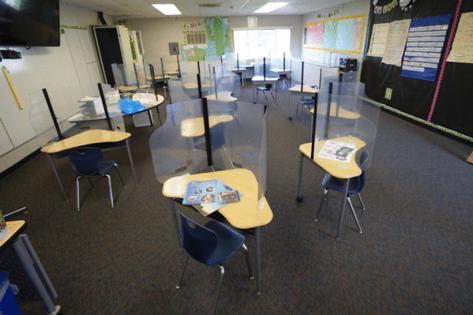 However the 9th Circuit appeals court essentially upheld the state's decision to keep public schools closed to in-person instruction during the pandemic.

The appeals court ruling is the latest development in the lawsuit Brach v. Newsom, which was filed against Gov. Gavin Newsom last July by California public school and private school families, including two from San Diego. A national conservative group called The Center for American Liberty led the lawsuit effort.

The lawsuit challenged the state's rules preventing K-12 schools from offering in-person instruction in counties with high COVID-19 rates. The plaintiff families argued that the rules deprived their children of a meaningful education and violated their due process rights and equal protections under the 14th Amendment.

In San Diego County some school districts reopened as early as last fall and were allowed to remain open throughout the pandemic, while others had to wait until spring to bring students back because of state restrictions. Even in some closed schools, the state allowed limited numbers of students on campuses for in-person services.

Newsom's office has defended the school closure rules, saying they were meant to help prevent the spread of COVID-19.

"Throughout this once-in-a-lifetime pandemic, the state was guided by science and data — prioritizing the health and safety of students, staff, and their families while supporting schools to meet the needs of students and return to in-person learning quickly," Newsom's office said in an email Friday. "All students are returning to full, in-person instruction next year, and the state is focused on ensuring that return is successful."

In December, a district court dismissed all the plaintiffs' due process claims for public and private school families. The district court said the 14th Amendment's due process clause does not recognize a fundamental right to basic education, and the plaintiffs had failed to explain how distance learning constituted a wholesale denial of a basic education.

The appeals court reversed that lower court's decision as it pertained to private schools and remanded the matter back to the lower court for further proceedings.

Among the three judges on the appellate panel, one judge wrote a dissent.

But Harmeet Dhillon, CEO of the Center for American Liberty, called the appeal court ruling "a huge victory for parents' rights."

"The Ninth Circuit rightly ruled in parents' favor, affirming that they — and not Gavin Newsom or faceless bureaucrats — have the right to decide how best to educate their children," she said in a statement.

"While we are thrilled for our clients whose rights are vindicated by today's decision, we are disappointed the Ninth Circuit did not rule that all students, including those in public school, have a basic right to an education. We will continue to advocate for the educational rights of all students," Dhillon said.