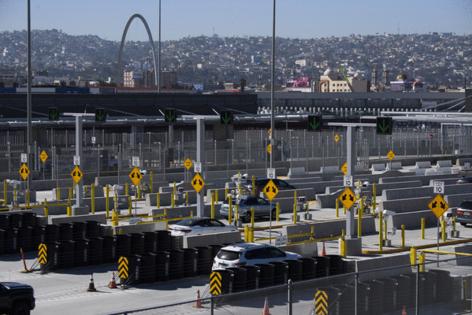 For some migrants who were initially scheduled to enter the United States this week, the last-minute changes have meant scrambles to find new housing and money for food in Tijuana and have even thrust some into dangerous situations that they might’ve otherwise avoided.

When asked about the cancellations, CBP officials pointed to a capacity issue at the San Ysidro Port of Entry from last weekend but declined to elaborate further.

The program to set appointments for certain asylum seekers is the result of a temporary agreement between the federal government and the American Civil Liberties Union in a lawsuit challenging the legality of a border policy that began under the Trump administration during the pandemic and continued under President Joe Biden.

That policy, known as Title 42, allows border officials to immediately expel asylum seekers and other migrants to Mexico or their countries of origin. In negotiation with the ACLU, the federal government is allowing nonprofits to identify particularly vulnerable asylum seekers who are in danger where they are waiting in Mexico because of threats, medical conditions or other urgent issues.

Once their requests for Title 42 exemption are approved, those asylum seekers are given dates and times to go into the United States at ports of entry. At San Ysidro, groups of asylum seekers have been entering in the morning and afternoon on most days.

Hollie Webb, lead attorney for the Border Rights Project with Al Otro Lado, a nonprofit that supports asylum seekers in Tijuana, said that many of her clients have ended up homeless because of the cancellations this week.

“CBP’s casual cruelty — telling people that they would finally be able to sleep safely then taking it away at the last minute — has managed to put people who were already highly vulnerable into even more precarious situations,” Webb said. “Any alleged capacity issues that CBP may have had could have been addressed and communicated in a way that didn’t leave dozens of people sleeping on the streets of Tijuana.”

Initially, a CBP official said the agency hoped to be back on track by Thursday, but some of Al Otro Lado’s clients who were scheduled to present at the border over the weekend were told their appointments were also canceled. CBP officials did not respond to a follow up request from The San Diego Union-Tribune about the timeline for resuming the program.

“Lives are at stake so we hope the government will immediately restore humanitarian exemptions at San Ysidro and will continue pressing the government to do so,” said Lee Gelernt, lead attorney for the American Civil Liberties Union.