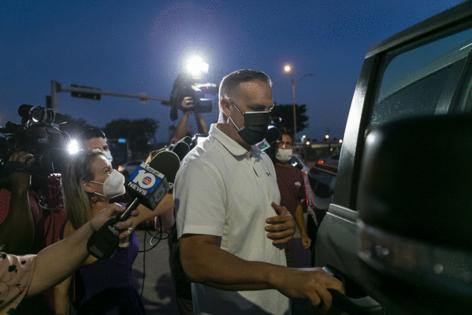 TALLAHASSEE, Fla. — A young Republican political operative who is also the subject of a public corruption investigation into former Republican state Sen. Frank Artiles made an offer to a recent college graduate last September: He would pay her $1,500 to chair a political committee and in exchange, she would have to do nothing.

At the time, 25-year-old Hailey DeFilippis, of Palm Harbor, had just found out she was pregnant and was “freaking out about money.”

So, she took up Alex Alvarado on the offer. And put her name down as chair of The Truth, a dark money-funded political committee that spent $180,000 on political mail advertisements promoting sham candidates in key 2020 state Senate elections — two in Miami-Dade and one in Central Florida.

When reporters started calling her with questions about the committee, Alvarado paid her $2,500 more for her “inconvenience.”

“I was hired for $1,500. Like that was the deal. And then he was generous enough to give me more due to the stress it was causing me,” DeFilippis said in a sworn statement she gave to Miami prosecutors in December.

DeFilippis, who said she connected with Alvarado through her high school friend, testified that she didn’t know anything of the scheme to influence the 2020 election. But her statements, and other documents released late Friday, provide new details into the breadth of the criminal investigation into Artiles and his long-time acquaintance, Alexis Pedro Rodriguez.

Prosecutors say Rodriguez was recruited by Artiles and paid some $44,000 to change his party affiliation from Republican to no party to qualify on the ballot and attempt to sway the outcome of the Miami-Dade Senate District 37 election. GOP candidate Illeana Garcia won the race by 32 votes. Rodriguez, who shared the same surname as the Democratic incumbent, received more than 6,000 votes.

Between June 15 and Nov. 15, 2020, Artiles was under contract to work for veteran Republican political operative Pat Bainter for $15,000 a month, court documents show. Bainter paid Artiles $90,000 and reimbursed him for his travel, a courier service and $4,000 for “research,” according to those documents.