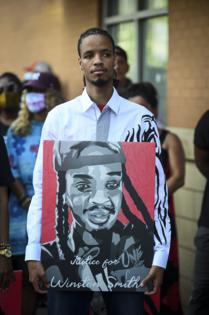 MINNEAPOLIS — Attorneys for Norhan Askar, the woman who was with Winston Smith in his car when he was killed by federal task force officers in June, have sued Hennepin and Ramsey counties, their sheriff's departments, and the two officers who fired the shots into Smith's car.

The lawsuit, filed Friday in Hennepin County District Court, claims three counts of denial of civil rights — state-created danger, excessive force and failure to announce — and one count of negligence. Askar is seeking at least $50,000 in relief.

The suit comes three weeks after Askar's attorneys held a news conference during which they described the June 3 event from her perspective. It says Askar never saw Smith with a firearm, despite the state Bureau of Criminal Apprehension's repeated assertions that he produced a gun when confronted. It also claims that officers opened fire after Smith raised his cellphone to videotape the encounter.

Officers did not identify themselves as law enforcement agents after they surrounded Askar and Smith in unmarked cars, the suit says. The shots that killed Smith also injured Askar by shattering the car's windows and sending glass shards flying, it adds.

The suit says multiple times that Askar "never acted in a dangerous manner," "never threatened any peace officer or member of the public," and "never committed a crime" on June 3. Askar "suffered severe emotional trauma" as a result of the officers pointing their guns directly at her and shooting into the car, it says.

"There was no reasonable excuse for using deadly force at the time of the Defendant's shooting," the complaint reads.

In addition to its claim that Smith was shot after he pointed a gun at officers, the BCA has said that investigators found a gun and spent cartridge casings in the car while executing two search warrants.

The two officers are listed as Jane and John Does. The Hennepin and Ramsey County Sheriff's Offices said the officers were serving in undercover roles for their respective departments and that their identities are shielded by state public records laws. It's unlikely that those names will ever be released.

Carolyn Marinan, public relations officer for Hennepin County, said Friday evening that she could not comment on pending litigation. Spokespeople from Ramsey County and the Hennepin and Ramsey County sheriff's offices did not immediately respond to phone calls and e-mails seeking comment on their roles as defendants in the lawsuit.

In addition to filing the lawsuit in Hennepin County, Askar's attorneys also submitted a letter to the U.S. Marshals Service notifying them of impending civil action under the Federal Tort Claims Act — a complex legal process through which some citizens can sue federal agencies.

The marshals have six months to resolve Askar's complaint through "administrative remedies" before her legal counsel files suit. Askar said she intends to seek $15 million in compensation from the federal agency.