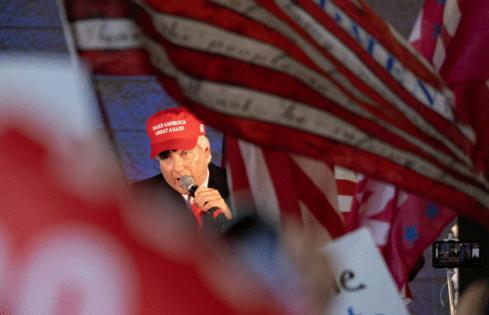 DETROIT — A federal judge in Detroit cannot punish Lin Wood because the election conspiracy-peddling attorney has never practiced in her jurisdiction and technically did not meet the dictionary definition of "broadcast" when he shared a video of a recent court hearing in a way that would violate local rules, Wood's attorney wrote in a filing submitted Thursday.

The argument from Wood attorney Paul Stablein is part of a larger effort to stave off sanctions for lawyers who filed a lawsuit last year filled with false and misleading information in a failed attempt to help former President Donald Trump win Michigan.

Last week, U.S. District Judge Linda V. Parker heard arguments for and against sanctioning Wood, Sidney Powell and a handful of other attorneys tied to the lawsuit. The Eastern District of Michigan bars the recording or broadcasting of hearings; typically, that prevents people from taking phones and cameras into courtrooms. But given the pandemic, Parker held the hearing virtually and it was broadcast over YouTube.

After the hearing, Wood took to social media platform Telegram and shared a small portion of a recording that showed Powell speaking at the hearing. That immediately prompted Robert Davis, a serial litigant who is also a member of this lawsuit, to ask Parker to hold Wood in contempt of court.

Stablein wrote she can't punish Wood at all because he has never practiced in the Eastern District of Michigan and is therefore not subject to its rules.

"Mr. Wood cannot be held to have practiced in this court or to be a member of this bar when he did not sign the pleadings nor authorize anyone else to sign for him. Therefore, this Honorable Court does not have the authority to impose discipline on an attorney who is not before the court in any capacity," Stablein wrote.

Wood's name does appear on several of the legal filings, but he argued during the sanctions hearing that he had no role in crafting or filing the lawsuit. Stablein noted Wood did not sign any of the filings. Powell appeared to support this, saying only she and her attorney Howard Kleinhendler wrote the lawsuit.

But when Parker asked Wood whether Powell requested his permission to include his name on this lawsuit, he appeared to say she did.

"Yes, your Honor. Let me answer that. I do not specifically recall being asked about the Michigan complaint, but I had generally indicated to Sidney Powell that if she needed a, quote/unquote, trial lawyer that I would certainly be willing and available to help her," Wood said, according to a trial transcript Stablein included in his filing.

"In this case obviously my name was included. My experience or my skills apparently were never needed so I didn't have any involvement with it."