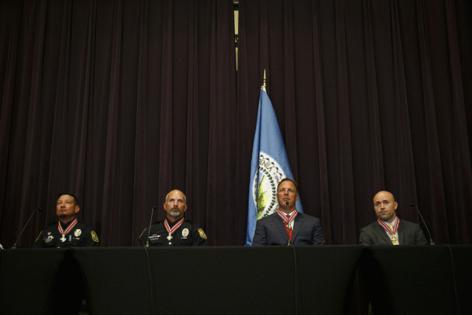 VIRGINIA BEACH, Va. — More than 80 people sat in the middle section of the Sandler Center’s theater to recognize four officers for their involvement in responding to the mass shooting two years ago in Virginia Beach.

For the first time since the shooting, city and state officials publicly recognized sergeants Peter Koepp and Mark Laino, along with master police officers Bobby Meis and Christopher Watkins. Each officer received a Congressional Medal of Bravery for their efforts on May 31, 2019.

Officials opened the ceremony with remarks about how they remember that day — and vowed they will never forget. Virginia Beach Police Chief Paul Neudigate recounted the officers’ experience after they responded to calls about the shooting in Building 2 of the Municipal Center, the public works building.

Koepp, Laino, Meis and Watkins arrived at the scene around the same time that Friday afternoon. They went through different entrances and formed a four-person team, moving toward the sound of gunshots on the second floor.

After leaving the stairway, the officers checked offices for the shooter. Meis approached a room and found the shooter, DeWayne Craddock. Meis shot Craddock, who fled down a hallway.

Neudigate, who was an assistant police chief in Cincinnati at time of the Virginia Beach shooting, said Craddock’s knowledge of the building as a city engineer allowed him to find ways around the officers. He approached the four from behind and opened fire through a wooden door.

Koepp was struck in his abdomen, but was protected by his bulletproof vest. The blow knocked him to the ground, but he kept shooting.

Laino moved the wounded officers to a stairway, while Watkins and Meis kept firing. Once pulled to safety, Laino and Meis continued to fire at Craddock through a wall.

“An untold number of individuals were saved that day,” said Neudigate, who replaced retired chief Jim Cervera in October. “They contained the shooter within minutes of the initial call for service ... never considering their own safety.”

Twelve people died and five people — including Koepp — were injured.

If you asked the four men if they consider themselves heroes, they would tell you they’re not. They said there were additional officers on sight who would have done the same thing, but the four happened to be the first ones to respond.

“Their job is not to run away, but run into danger,” U.S. Sen. Mark Warner said during the ceremony.

During a news conference, the four officers said although they are honored to receive their medals, they would give it up if they could bring back the lives that were lost that day.