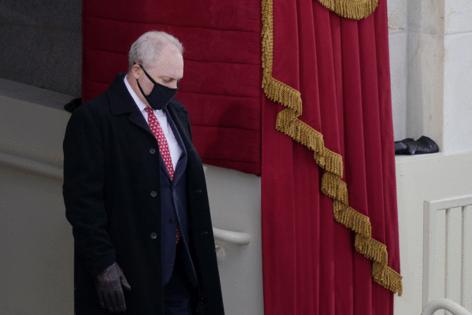 WASHINGTON — The tone of some Republican leaders on COVID-19 vaccines has shifted in response to the highly infectious delta variant, but a continued emphasis on values like personal liberty and privacy could muddle the message.

The delta variant is proliferating, comprising 83% of cases in the United States and an even higher percentage in places with lower vaccination rates, according to the Centers for Disease Control and Prevention, with repercussions for the country’s most vulnerable people as well as the economy’s fragile recovery.

At the same time, nearly half of the House Republican caucus has yet to say publicly if they are themselves vaccinated, according to CNN. Republican lawmakers who have expressed support for the vaccine also stress the importance of individual freedom.

“I think the vaccines are great. People should absolutely consider getting vaccinated,” said Rep. Tom Emmer of Minnesota, chairman of the National Republican Congressional Committee. “That being said, it is a personal decision for them. I think the best we can do is continue to encourage people and remind them that they’re safe and talk about all our family and friends that have had the vaccine and have had no negative reaction to it.”

Republican members of Congress who are also physicians, the GOP Doctors Caucus, held a press conference Thursday to emphasize the importance of vaccines in light of the rapid spread of the delta variant, but the remarks mostly focused on investigating the origins of the pandemic in Wuhan.

Concerns about lagging vaccinations and climbing COVID-19 caseloads threaten to distract from Republican calls for an investigation into the so-called “lab leak” hypothesis that the pandemic resulted from coronavirus research in China, just as more evidence has emerged adding some credibility to the possibility.

Republican Whip Steve Scalise, R-La., whose decision to get a shot this week is emblematic of the slight shift in strategy, emphasized at the news conference that the FDA authorization wasn’t rushed.

He said he previously felt protected by pre-existing immunity from a previous infection but that the delta variant encouraged him to get vaccinated.

The conservative messaging on personal freedom could cloud the fact that the effects of COVID-19 are much more common and more severe than potential side effects of the vaccines, and that the vaccines have been rigorously studied.

“I would have hoped that these leaders were not so casual at emphasizing personal choice but were rather saying, ‘Now that this delta variant is here, this changes things,’” said William Schaffner, an infectious diseases expert at the Vanderbilt University School of Medicine. “You have a choice whether or not to get vaccinated: I want you to make the choice to be vaccinated.”