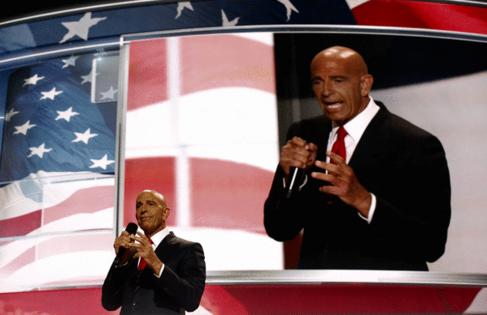 Colony Capital founder and Trump ally Thomas J. Barrack Jr. is scheduled to appear before a federal judge in Los Angeles Friday to learn whether he will be released on bail, after his arrest this week on charges of illegally lobbying on behalf of the United Arab Emirates.

Barrack, 74, has been held in a federal jail in Los Angeles since his arrest Tuesday at an office park in Sylmar, California. His Colony Capital associate, Matthew Grimes, 27, was arrested in Santa Monica, California. U.S. Magistrate Judge Patricia Donahue had ordered both men held in custody while their lawyers worked out bail packages to the satisfaction of prosecutors. The bond hearings, set to begin at 10 a.m. in California, were scheduled for July 26 until a last-minute change was announced Thursday night.

Barrack and Grimes are charged with working on behalf of the UAE in a yearslong effort to sway Donald Trump’s foreign policy, even before he became president, according to a seven-count felony indictment unsealed in Brooklyn, New York.

During the Tuesday hearing, prosecutors urged the judge to keep Barrack, the son of Lebanese immigrants, behind bars. They called him “an extremely wealthy and powerful individual with substantial ties to Lebanon, the UAE, and the Kingdom of Saudi Arabia” who posed a risk of fleeing based on the seriousness of the charges and what they called “the overwhelming evidence of his guilt.”

They said he has access to a private aircraft and “deep and longstanding ties to countries that do not have extradition treaties with the United States.”

The U.S. also called Grimes, who worked for Barrack at Colony, a flight risk.

In the indictment, prosecutors alleged that four UAE officials “tasked” Barrack, Grimes and a third man, Rashid Alshahhi, 43, who’s also known as Rashid Al Malik, a UAE national, with trying to mold and influence public opinion through media appearances; helping to shape the Trump campaign’s foreign policy and later to develop what the government called a “back-channel line of communication” with U.S. government officials that promoted the interests of the UAE.

Barrack was also separately accused of obstruction of justice and with making false statements in a 2019 interview with FBI agents when he denied being asked to acquire a phone dedicated to communicating with officials in the Middle East.

Grimes offered to put up a $2 million bond at Tuesday’s hearing, but prosecutors said that was inadequate. They called Grimes “a trusted intermediary” between Barrack and Alshahhi, working often at the direction of UAE government officials, and “facilitating the corruption of U.S. foreign policy in favor of UAE interests.”

Michael Freedman, a lawyer for Grimes, called him a “low-level individual.”