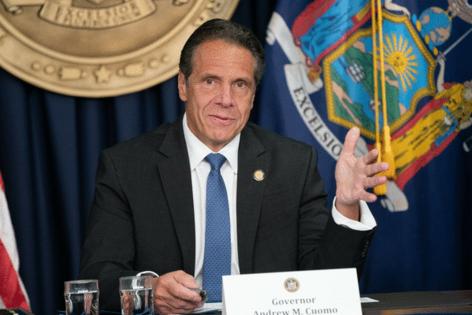 ALBANY, N.Y. — As tensions rise in the state Capitol over the Assembly’s impeachment probe of New York Gov. Andrew Cuomo, the governor’s lawyer on Thursday raised “constitutional concerns” about a lawmaker’s admonishment of a Cuomo aide for tweeting criticism of Attorney General Tish James.

Lavine, the chair of the Judiciary Committee and the head of the Assembly impeachment probe, on Wednesday responded by warning of “severe repercussions” over the comment.

Fishman said Thursday that Lavine’s criticism of Azzopardi was out of line.

“Punishing executive officials for speaking about important issues of public policy is not merely inappropriate, but is fundamentally inconsistent with the core values of our nation’s founders,” Fishman wrote.

“That would be true even had Mr. Azzopardi been criticizing the Attorney General’s investigation.”

“Your threat to quash speech about an entirely different political matter makes these constitutional concerns all the more acute,” he added.

In his tweet last week, long-time Cuomo aide Azzopardi also remarked that James “has said she may run against the governor.”

Lavine called on Cuomo to keep his staff in check and warned Azzopardi’s comments could have a chilling effect on potential witnesses.

Independent investigators working under James are expected to soon release a public report detailing their findings.

The Assembly impeachment inquiry is also looking into the harassment allegations by nearly a dozen women, several current and former Cuomo staffers. Lawmakers are also investigating claims that the 63-year-old governor illegally used staff to help him write and promote a pandemic-themed book last year.

Also being probed are allegations that Cuomo helped family and friends get access to scarce coronavirus tests early on in the COVID-19 crisis, the potential hiding of the true number of deaths in nursing homes, issues with the Mario Cuomo Bridge and whether the governor knew of any attempts to suppress or obstruct related investigations.

Additionally, federal investigators are examining whether top Cuomo aides obfuscated the total number of COVID deaths in elder care facilities during the pandemic.

The governor has denied any wrongdoing and continues to resist calls for his resignation.