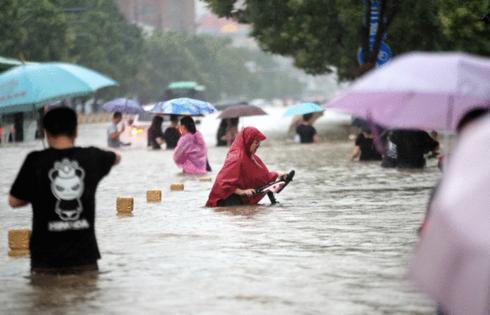 Devastating floods destroyed towns in Germany and Belgium. A ruthless heat wave broiled the Western U.S. and Canada. Heavy rains paralyzed a Chinese industrial hub home to 10 million people. These recent weather phenomena are being intensified by the changing climate.

But the link between these far-flung extremes goes beyond warming global temperatures. All of these events are touched by jet streams, strong and narrow bands of westerly winds blowing above the Earth’s surface. The currents are generated when cold air from the poles clashes against hot air from the tropics, creating storms and other phenomena such as rain and drought.

“Jet streams are the weather — they create it and they steer it,” said Jennifer Francis, a senior scientist at the Woodwell Climate Research Center. “Sometimes the jet stream takes on a very convoluted pattern. When we see it taking big swings north and big dips southward we know we’re going to see some unusual weather conditions.”

Meteorologists worry whenever those swings and dips form omega-shaped curves that look like waves. When that happens, warm air travels further north and cold air penetrates further south. The result is a succession of unusually hot and cold weather systems along the same latitude. Under these conditions, winds often weaken and dangerous weather can remain stuck in the same place for days or weeks at a time — rather than just a few hours or a day — leading to prolonged rains and heat waves.

“It’s just like when waves in the ocean get to a beach, overturn and break,” said Tess Parker, a research fellow at the ARC Centre for Excellence for Climate Extremes at Monash University in Melbourne, Australia. “That can happen in the atmosphere as well, and if that happens you tend to catch a high- or low-pressure system that will become stationary.”

That’s what sunk parts of Germany into floods earlier this month, as a low pressure system became pinned above the country’s western region. Heavy rains soaked the terrain for the first two days, followed by a few hours of even more intense precipitation that caused rivers to overflow. Water and mudslides overran houses and roads, killing more than 170 people and leaving hundreds missing. Heavy rains also swamped parts of Luxembourg, Belgium and the Netherlands.

“Of course the events in Germany had to do with the position of the jet stream,” said Johannes Quaas, a meteorologist and a professor at Leipzig University. At the same time, he said, there’s evidence that the atmosphere can hold 7% more moisture for every degree of Earth’s warming. Global average temperatures are already about 1.2º Celsius above pre-industrial levels.

“We were immensely shocked,” said Stefan Heydt, a spokesperson for the German armed forces in the state of North Rhine-Westphalia, which suffered severe damage in the recent floods. His home state, Rhineland-Palatinate, was also badly affected. Heydt said a cousin still lives there and now has to drive 60 kilometers for electricity.

“Whole existences were destroyed from one moment to the next,” Heydt said.

The economic fallout from the floods in Europe is still unfolding, and it’s already clear that a wide range of sectors will feel the blow. Germany halted operations at an open-cast lignite mine run by RWE AG, curbing output at the connected Weisweiler power station. Most of the company’s hydroelectric dams in the west of the country and one power station in the Netherlands also stopped operating.