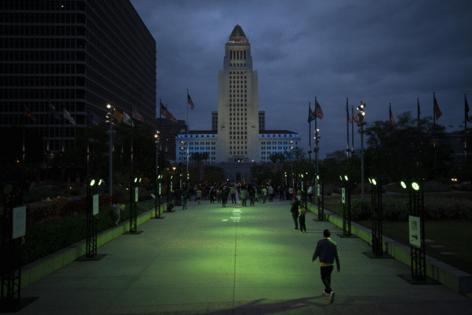 LOS ANGELES — For much of the past year, Los Angeles Mayor Eric Garcetti’s spokesman has responded to allegations that a high-level adviser engaged in sexual harassment and that top staffers in the mayor’s office did nothing about it.

Deputy communications director Alex Comisar has told reporters that Garcetti has “zero tolerance” for harassment. At one point last fall, Comisar said that neither the city nor the mayor were told of any allegations of harassment regarding the adviser, Rick Jacobs.

Now, two former Garcetti staffers have testified in separate, sworn depositions that Comisar himself complained about Jacobs' behavior. One of those former staffers produced text messages from Comisar.

Comisar declined to comment on the statements and texts attributed to him. Garcetti’s office would not confirm that the staffer mentioned in the two depositions was Comisar, saying that person’s identity is protected under a confidentiality agreement.

In a deposition given last month, former Garcetti aide Suzi Emmerling said Comisar informed her that he had been touched by Jacobs. The testimony was reviewed this week by the Los Angeles Times.

“He told me that Rick — I want to say touched him, his leg under the table or something like that,” Emmerling said in the deposition. Emmerling, who was Comisar’s supervisor, said the event occurred sometime between 2017 and 2019 and she did not recall the location.

Naomi Seligman, who also worked as communications director and was at one point Comisar’s boss, said in her own deposition that she too heard from Comisar about Jacobs’ behavior. “Got hit on by Rick again,” Comisar wrote in the text to Seligman, a copy of which was reviewed by The Times.

When Seligman’s deposition became public two weeks ago, Comisar’s name was redacted. Since then, two sources have confirmed to The Times that he is the unnamed mayoral employee who sent the message discussed by Seligman. Garcetti’s office declined to comment on whether key statements in the two depositions are accurate.

When the first sparks ignited in the dense forest of Plumas County, the conditions were primed for a monster.

It was incredibly dry, incredibly hot and winds were on the way. Within hours, the fire had a name, Dixie, and ...Read More

LOS ANGELES — After the killing last week of an Indigenous Mexican teen by police in Salinas, advocacy groups are concerned that language barriers may have played a role in the fatal encounter.