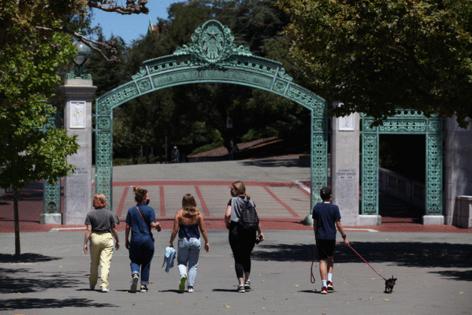 LOS ANGELES — The University of California will raise tuition beginning in fall 2022 after the Board of Regents approved the increase Thursday following prolonged debate and widespread student protests.

The 4.2% increase in tuition and fees — $534 added to the current annual level of $12,570 — will apply only to incoming undergraduates next year and stay flat for up to six years for them. Successive undergraduate classes would get a similar deal — one increase tied to inflation in their incoming year with tuition frozen for six years.

The undergraduate tuition increase includes a 2% surcharge for the incoming class next year, declining for subsequent classes until it is phased out by 2026. Graduate student tuition would be adjusted annually by the rate of inflation.

The regents’ action marked UC’s second tuition increase since 2011 and came after two years of discussion. It was set for a vote last July but shelved with the onset of the COVID-19 pandemic.

Drake told regents Thursday that the financial squeeze on campuses over the past several years has resulted in negative fallouts on students — more crowded classrooms and dorms, less interaction with faculty and more difficulty in accessing courses needed to graduate.

“This is not sustainable, and it is not acceptable,” he said. “This plan proposes a much more stable and secure way forward for students and for the university.”

Opponents of the plan, however, have sharply questioned raising tuition amid a pandemic that has upended financial stability for so many families and after Gov. Gavin Newsom and the Legislature provided the university system with $1.27 billion, the largest ever single-year infusion of state funding, for the 2021-22 fiscal year.

The UC Student Association and several other campus organizations lobbied against the increase, using a #stoptheforeverhike social media campaign. They argued that the plan would hurt students who fall through the cracks — LGBTQ students whose parents refuse to pay college costs, immigrants here without legal authorization who don’t qualify for in-state tuition and low-income nonresident students hit by fluctuating exchange rates and limited financial aid access.

Students who spoke out against the tuition plan during the public comment period Thursday also said it would increase financial burdens on those who already struggle to personally pay the $10,000 UC expects them to contribute to their education and reduce racial and economic diversity.