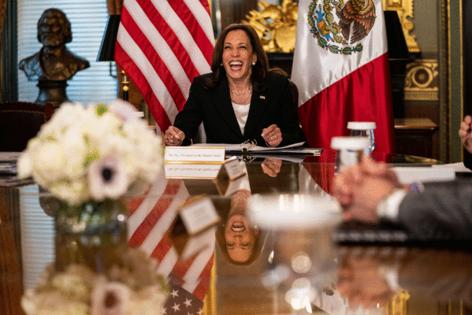 "You're writing a story in the Los Angeles Times about the vice president's laugh? I think that's laughable." — Bakari Sellers, Democratic lawyer and CNN commentator

Seriously, to weigh how the first woman and first woman of color to become vice president is perceived, Kamala Harris' laugh may provide the ultimate gauge.

While many people just hear levity in her laugh, those on the right react with heckles and attacks, a difference that says as much about the divisive, personally vicious state of politics as any debates over policies.

President Donald Trump made fun of "the laugh" at a late October rally in Pennsylvania. "Ha! Ha! Ha!" he bellowed mockingly, and mirthlessly, adding his own snicker as he otherwise savaged Harris for being "more liberal than 'crazy Bernie.'"

Newt Gingrich, the Republican former House speaker and Fox News commentator, in an interview called Harris' laughs "distinctively jarring." And a male host on Newsmax claimed at one point, "Well, the queen bee — cackling Kamala — is losing her support among Democrats."

Harris' supporters and some outside observers say the attention to her mirth is not funny. Instead, they say, it reflects the double standard she faces as a pathbreaking politician as well as the pressure to appear at once likable and tough, yet still authentic. Sellers called the critics' catcalls "obscene and upsetting — because she's such a great spirit and that's what she exudes in her laugh."

"If it weren't her laugh, it'd be her smile or the way she dressed," said Arisha Hatch, vice president of Color of Change, a group that advocates for racial justice. "It is just another conversation that demonstrates how difficult it is to be a woman-of-color leader in this country."

Besides, say those who know her, Harris genuinely likes to laugh.

"She's just a person who tries to find joy and happiness in everything," said Nathan Barankin, her former chief of staff when Harris was in the Senate and, before that, California's attorney general.

HONG KONG — France isn’t the only country upset about a new security pact between the U.S., U.K. and Australia: Some Southeast Asian nations are also worried the partnership could provoke China and spur a regional arms...Read More