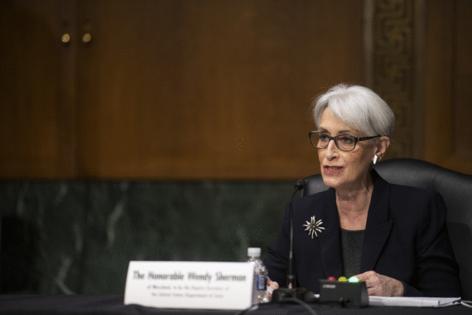 WASHINGTON — U.S. Deputy Secretary of State Wendy Sherman will travel to China on Sunday as bilateral tensions rise over hacking accusations and sanctions on Chinese officials.

Sherman will travel to the Chinese port city of Tianjin to meet with Chinese officials including State Councilor and Foreign Minister Wang Yi on July 25 and July 26, the State Department confirmed in a statement Wednesday.

“The Deputy Secretary will discuss areas where we have serious concerns about PRC actions, as well as areas where our interests align,” the State Department said, referring to the People’s Republic of China.

State Department spokesman Ned Price told reporters Wednesday that Sherman’s visit is intended to show China “what healthy and responsible competition looks like” and to make sure that “competition doesn’t veer into conflict” by ensuring there are “guardrails” in the relationship.

Already strained relations between the two countries have further deteriorated after the U.S. and key allies tied the Chinese government to a sprawling Microsoft Exchange hack, warned American companies about doing business in Hong Kong and issued fresh sanctions on Chinese officials. Sherman would be the second Biden administration official to visit China after climate envoy John Kerry met with his counterpart in Shanghai in April.

Ryan Hass, a senior fellow at the Brookings Institution, said he expected both the U.S. and China to make sure the discussions are “forthright.”

“Given the current stresses in the relationship and the possibility of a meeting between both leaders at the G-20 in October, I suspect both sides decided to turn focus to matters of substance,” he said.

Sherman held trilateral talks with her Japanese and South Korean counterparts in Tokyo earlier this week. Their discussion on preserving peace in the Taiwan Strait prompted a stern rebuke from Beijing.

Sherman will travel to Oman on July 27.

The shooting happened at a Kroger grocery store in Collierville, a city about 25 miles ...Read More

KANSAS CITY, Mo. — An appeals court has denied a request from the Missouri attorney general's office that all judges in Jackson County be disqualified from hearing local prosecutors argue Kevin Strickland is innocent.

WASHINGTON — Deputy Secretary of State Wendy Sherman pushed back Thursday against scathing criticism from Daniel Foote, the administration’s special envoy for Haiti who resigned this week, saying she disagreed with his...Read More

Americans ages 65 and older should get booster shots, a panel of experts advising the Centers for Disease Control and Prevention said in a unanimous vote Thursday. People over 50 with weakened immune systems were also ...Read More

MIAMI — Despite the controversies surrounding him and a lashing from Miami commissioners, someone appears to be a very big fan of Miami Police Chief Art Acevedo.

So much so, that a person using the same computer address...Read More

MINNEAPOLIS — A felony case has been filed against the father of a man charged earlier with fatally shooting four people in St. Paul and leaving their bodies in a vehicle abandoned in a western Wisconsin farm field.