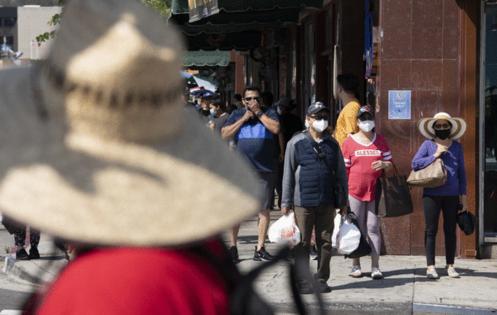 LOS ANGELES — Los Angeles County reported its largest single-day total of new coronavirus cases in months as the region races to wrap arms around what officials now say is a new surge of the pandemic.

Public health officials reported 2,551 new infections Wednesday — the highest figure since early March, when the county was shaking off the last vestiges of the fall-and-winter wave.

Wednesday’s report continues a troubling pattern of increased transmission that emerged following the state’s June 15 reopening and coincided with increased circulation of the hypercontagious delta variant.

“Because of the more infectious delta variant and the intermingling of unmasked individuals where vaccination status is unknown, unfortunately, we are seeing a surge in cases in L.A. County that looks somewhat similar to last summer,” Public Health Director Barbara Ferrer said. “An important difference this summer is that, with millions of people vaccinated, we are hopeful we will avoid similar increases in deaths.”

Officials have said many of the new infections being confirmed, both in L.A. County and statewide, are among the unvaccinated.

Over the week of July 7 to 14, the average case rate among unvaccinated Californians was 13 per 100,000, according to the state Department of Public Health. The comparable figure among those who had been vaccinated was 2 per 100,000.

But even with roughly 53% of L.A. County fully vaccinated, millions of residents remain vulnerable to the latest resurgence of COVID-19.

Officials have expressed growing alarm over the spread. The countywide test positivity rate now stands at 5.2%. A month ago, it was only 0.7%.

Wednesday’s case count was also 20 times higher than the daily figure recorded a month ago.

The number of COVID-19 hospitalizations has also risen rapidly. On Tuesday, 645 coronavirus-positive patients were receiving that level of care countywide — nearly triple the number seen a month ago.