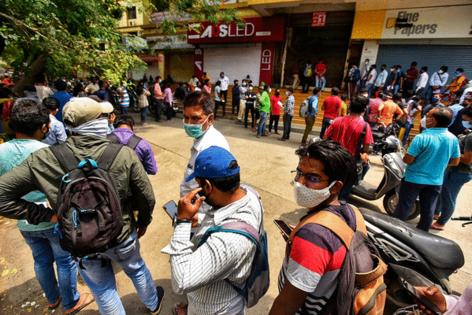 NEW DELHI — India’s actual death toll from COVID-19 could range between 1.3 million to a staggering 5 million, with even the most conservative estimate putting its tally at more than double the U.S., the highest recorded in the world so far.

The numbers, derived from research models and local authority data, range from three to 10 times the country’s official count, adding to evidence that the true cost of India’s outbreak has been massively under-reported.

As corpses floated in the Ganges, a river sacred to millions of Hindus, and crematoriums and graveyards were overwhelmed, skepticism grew over the death toll of around 420,000 recorded by Prime Minister Narendra Modi’s government, which has used the ostensibly low mortality rate to defend India’s COVID-19 track record.

Bloomberg approached authorities in about half of India’s 28 states and territories seeking death data from April and May for the last two years and analyzed figures from researchers and experts. The result is clear: the real toll has been vastly underestimated because of a combination of under-counting, a backlog in the civil registration system and a lack of testing leading to COVID-19 deaths being classified as other conditions like heart disease.

The findings dovetail with estimates from researchers around the world. Bhramar Mukherjee, a professor at the School of Public Health at the University of Michigan, has devoted much of the past year to modeling India’s pandemic. Her studies suggest the death toll is around 1.3 million up to June 15.

Rukmini S, a leading data journalist, has written that the numbers she’s gathered suggest a death toll closer to 2.5 million.

A report from the Washington-based Center for Global Development think tank released Tuesday studied data from three different sources, finding that excess deaths — a term public health experts use to describe mortality from all causes during a crisis that is above what would have been expected in ‘normal’ conditions — likely ranged between 3.4 million to 4.9 million.

“Regardless of source and estimate, actual deaths during the COVID pandemic are likely to have been an order of magnitude greater than the official count,” said the report, co-authored by Arvind Subramanian, former chief economic adviser to the Indian government and two other researchers. “True deaths are likely to be in the several millions, not hundreds of thousands, making this arguably India’s worst human tragedy since partition and independence.”

The federal Health Ministry in a July 14 press release called media reports on higher COVID-19 death counts “speculative.” India’s Health Minister Mansukh Mandaviya told Parliament Tuesday that “detailed guidelines for reporting of deaths have been issued by Union Health Ministry to all states and union territories.” The ministry did not respond to written questions from Bloomberg.

Despite widespread reporting on oxygen shortages across India as the second wave of infections hit the country in April and May, the minister added that “no deaths due to lack of oxygen has been specifically reported” by local governments.