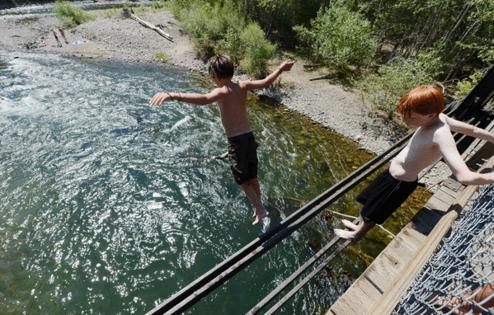 BOISE, Idaho — The 100-degree temperatures are taking a toll on Idaho farmers, and worries about water usage are becoming commonplace.

Gary Lucas, stock seed manager with Crookham Company in Caldwell, said the heat wave this summer has farmers watering crops every four days, when normally they could stretch that to seven.

Irrigation districts also warn that they might have to shut off water in September, over a month before the typical cutoff date. Lucas worries there is even a risk that water could shut off in August.

“If they shut off water in August, many crops won’t make it,” he said.

Josie Erksine, a farmer and co-founder of Peaceful Belly Farms in Caldwell, said her lettuce and leafy greens are burning in the fields. In an effort to keep things alive in the high heat of the past few weeks, Erskine said they have had to increase their watering, something she called “heartbreaking” during what has become Southwest Idaho’s worst drought in years.

Now Treasure Valley water officials are urging residents and farmers to use water wisely — and wondering whether the dry spell will stretch into the future, and how bad things will get.

This water year started off fairly normal, with snowpack at 70% to 80% of average in most parts of the state. But as spring went on, little rain fell. When snowpack began to melt, it drained into the already dry soil instead of running off into reservoirs. By May, experts were forecasting abnormally dry conditions across Idaho. When record-setting temperatures and a historic heat wave hit in June and July, the drought rapidly worsened.

“What we’re seeing is not at all common,” said David Hoekema, a hydrologist with the Idaho Department of Water Resources, in a phone interview. “This is a drought that nobody’s ever witnessed before.”

Hoekema said the extent of the drought, while not Idaho’s worst on record, took water resource experts by surprise. Typically, he said, decent snowpack is an indicator of a good water year. The extreme lack of precipitation in the spring played a key role.

Hoekema said two other drought years were worse on the Boise River System, which is fed by water from Lucky Peak, Arrowrock and Anderson Ranch dams: “1977 … was the year when the snow just didn’t accumulate in the mountains, so people saw it coming. In 1992 (we were) in the midst of a multiyear drought, so people could see that coming. … This one really took us by surprise.

“In the Boise area, we’re not looking at an unprecedented drought … what’s really hurting people is they weren’t expecting this.”

Drought conditions ramped up in June as the Northwest was hit with an unprecedented heat wave. “Severe drought” and “extreme drought” distinctions began to expand rapidly.

Currently, all of Southwest Idaho — and most of the state — is in moderate to severe drought, according to the U.S. Drought Monitor. Some spots in the Panhandle and Southeast Idaho are in extreme drought, but nowhere is as hard-hit as the Wood River Valley, which has been in a state of exceptional drought — the worst category — for weeks.

“They saw this drought coming, in a sense, because they were already in drought. But even for them, this hit a lot harder than expected,” Hoekema said.

Water users in the Boise area are also starting to feel a squeeze on resources. Pioneer Irrigation District Superintendent Mark Zirschky said that so far, this year resembles past drought years — though he, too, said he was caught off-guard by the conditions.

“This year the snowpack was looking really good, but then it didn’t hold. Conditions were that it came off slowly at first but never made it to the reservoir. Then it got hot and it just evaporated,” he said.

The city of Caldwell and Pioneer Irrigation, whose district covers 35,000 acres largely between Caldwell and Nampa, recently asked customers to reduce water use, suggesting water-saving measures like alternating watering days between neighbors, not using potable or hose water to irrigate, reducing shower length time, and running dishwashers and washing machines only when they are full.

Even with those measures, Zirschky said, he expects the district will turn off its water supply in September, a month earlier than usual.

Pioneer has also tapped into its stored water early.

“A normal year, we’d be about middle of June to middle of July before we start relying on storage water. … We’ve been diverting nearly all storage a month earlier than we normally do,” Zirschky said.

Other local irrigation districts are seeing similar cutbacks. Settlers Irrigation District, which spans about 14,000 acres in Meridian and Eagle, has cut all its water deliveries to 60%, according to an announcement on its website. Farmers Union Ditch Co. also announced a cutback to water deliveries as early as June 2. Irrigation at the Two Rivers luxury subdivision in Eagle has been turned off indefinitely, according to an automated phone message through the homeowners association. That subdivision is served by Mace Catlin Ditch Co..

“The consensus is we will probably see some canals in the valley go off in mid-September,” said Rex Barrie, the Boise River watermaster, in a phone interview.

Brent Orton, public works director for the city of Caldwell, is also concerned with agriculture water needs. The city is asking residents and homeowners associations to take a stricter approach to manage water use, “even if it means browning lawns and common areas for this year,” Orton said.

Orton suggests having households water at different times of the day on different days.

During the past month of the heat wave, Orton said the city has seen an increase in residents using potable, or drinking water, for irrigating.

“We don’t want to put a strain on the capacity to pump water so we are asking people to be careful about using potable water for irrigation and asking homeowners to be patient with lawns browning,” Orton said.

The city of Nampa also asked residents to alternate watering days and suggested that people watering adjust the time they water to between 10 a.m. and 5 p.m. Meridian Mayor Robert Simison also warned residents of irrigation concerns in a blog post on the city website.

It’s too early to tell what sort of precipitation this winter and next spring will bring. Hoekema said it’s too late now for Idaho to recoup its losses in the current water year, which ends in September.

“There’s really no recovery at this point, it’s just a matter of trying to utilize our resources as best we can to get through this period,” Hoekema said.

Using storage water now could leave reservoirs at lower capacity for the next water year, and a poor snowpack or another dry spring could mean a worsening drought. Barrie called the winter precipitation “the great unknown.”

“If we don’t get any snow this winter, we could be looking at a very brief (season) … if we have a season at all next year. It really depends on the snowpack,” Zirschky said.

Lucas said farmers are already concerned about water next year.

“If we don’t get a snowpack, it is going to snowball,” he said. “(Farmers) are going to look into the future and grow crops that are not as risky, like wheat or something that comes off early. They are not going to take a risk with something like sugar beets, or sweet corn.”

Lucas said Crookham Seed Co. is beginning to plant onion seed that grows in the fall. Without water in September, he said the seed won’t be there to harvest come winter.

Steve Spiteri, a farmer with Ohana No-Till Farm, a small farm in Meridian, said drought concern is one reason his farm has adopted techniques to reduce its water usage. He uses drip line irrigation, vertical farming and hydroponics to reduce water needs, he said. Spiteri’s operation is much smaller than Crookham, but he believes more farmers are going to have to use more sustainable farming models that require less water.

Barrie said everyone should be careful about how they’re using resources this year.

“I would encourage people to conserve in any way they can,” he said.