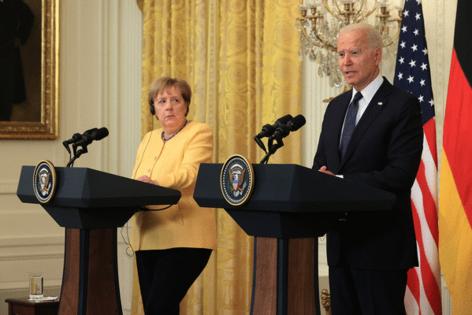 WASHINGTON — The U.S. and Germany have completed a deal approving completion of the Nord Stream 2 pipeline, effectively ending a longstanding rift over German gas purchases from Russia, the allies confirmed Wednesday.

Under the agreement, Germany commits to taking action if Russia tries to use energy as a weapon against Ukraine, a decision that may mark a concession from Chancellor Angela Merkel, who had previously balked at making independent moves against the Kremlin over the gas pipeline that will run from Russia to Germany and could allow Moscow to bypass Ukraine.

“The United States and Germany are steadfast in their support for Ukraine’s sovereignty, territorial integrity, independence and chosen European path,” the allies said in a joint statement. “We recommit ourselves today to push back against Russian aggression and malign activities in Ukraine and beyond.”

The U.S. and Germany will also seek to promote investments of at least $1 billion in a so-called Green Fund to help Ukraine’s transition to cleaner sources of energy. Germany commits to an initial $175 million investment in the fund. Germany would also appoint a special envoy — with $70 million in funding — to support bilateral energy projects with Ukraine.

The deal puts an end to a decadelong U.S.-German feud over the project, which critics have argued would give Moscow too much leverage over European national security. Biden’s administration initially suggested it would try to halt construction but later shifted its approach, saying doing so would be a long shot and only sour relations with the German government.

If Russia attempted to use energy as a weapon or commit aggression against Ukraine, Germany would take action itself while also pressing for measures at the European level, including sanctions to limit Russia’s energy exports, according to the accord.

“This is a bad situation and a bad pipeline, but we need to protect Ukraine,” Victoria Nuland, undersecretary of state for political affairs, told a Senate Foreign Relations Committee hearing on Wednesday. Ukraine’s President Volodymyr Zelenskiy has been invited to visit the White House on Aug. 30, White House Press Secretary Jen Psaki said Wednesday.

While the accord raises the possibility of limiting Russian gas flows, the language is disappointing critics — including many U.S. lawmakers — who say that the administration hasn’t done enough to stop the pipeline, which was more than 90% complete when President Joe Biden came into office.

Sen. John Barrasso, a Wyoming Republican, told Nuland that the pipeline puts a “stranglehold” on Europe. “Protecting this Russian trap is not in our national security interest,” he said.

Republican Sen. Ted Cruz of Texas called the accord with Germany a “complete and total capitulation by President Biden to Putin.”