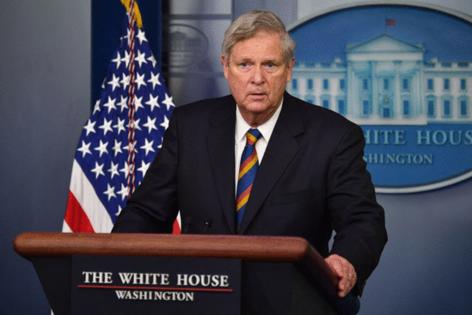 During a Senate Judiciary Committee hearing on creating an earned pathway to citizenship for migrant farmworkers, several Republicans said they would not support such legislation without first ramping up border security.

“You don’t give amnesty and hope people won’t keep coming. You secure the border, then you provide legal status. We’re doing it a-- backwards,” said Sen. Lindsey Graham, R-S.C.

The House in March passed legislation that would allow migrants who worked a certain number of years in agriculture to apply for legal status. Vilsack defended the bill, saying he doesn’t believe its passage would cause an influx of migrants at the border.

“I think the primary reason why people are crossing the border, senator, is because they’ve got a very difficult experience economically back home,” Vilsack said.

“Have you ever talked to the Border Patrol about this?” Graham shot back. “Go talk to them. And you’ll find out how wrong you are.”

“Mr. Secretary, if we were having a hearing on the optimum fertilizer for growing corn, I think you might be a very good witness,” Cruz said.

“And with all due respect your answers on immigration were fertilizer,” he added.

Vilsack defended the immigration portions of the proposed legislation, known as the Farm Workforce Modernization Act, pushing back against claims that a process allowing farmworkers to apply for U.S. citizenship after paying a $1,000 penalty fee is “amnesty.”

He also challenged Republicans’ position that a pathway to citizenship for undocumented immigrants cannot come without heightened border security measures.

After Cruz described the border last year under former President Donald Trump as “the most secure it’d been in 45 years,” Vilsack hit back: “If that’s the case, then why didn’t you all pass the Modernization Act last year after it passed the House?”

Later in the hearing, Sen. Alex Padilla, D-Calif., chairman of the committee’s immigration panel, noted Vilsack serves as secretary of Agriculture, not of Homeland Security, and said he would “focus my questions appropriately, so on issues of agriculture and agricultural industry.”

The debate over citizenship for migrant farmworkers comes just days after a federal judge ruled that the Obama-administration’s Deferred Action for Childhood Arrivals program, which protects certain undocumented immigrants brought to the U.S. as children, is illegal.

The court’s ruling, which won’t affect current DACA recipients, increases pressure on Congress to establish permanent protections for those undocumented immigrants and others, including essential workers during the pandemic, farmworkers, and immigrants with humanitarian protections.

The farmworker legislation at issue in Wednesday’s hearing, which would also streamline the process for farms to hire migrant workers and increase worker protections, has garnered some bipartisan support. It is co-sponsored by 13 House Republicans and passed the chamber in March with 30 Republican votes.

Democrats are also hedging their bets on the budget reconciliation process, which may allow them to create pathways to citizenship for certain categories of undocumented immigrants with a simple majority vote — if the Senate parliamentarian allows such provisions to be included.