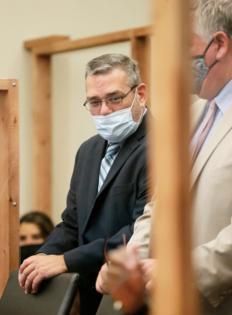 COLUMBUS, Ohio — Defense attorneys for Adam Coy, a former Columbus police officer charged with murder in the December shooting death of Andre Hill, are seeking a change of venue for his trial.

They learned Wednesday that the judge assigned to the case isn't ready to rule on their motion, in which they argue that pretrial publicity will make it "impossible" to seat an impartial jury in Franklin County.

Common Pleas Judge Stephen L. McIntosh said he will review the motion, filed three weeks ago by attorneys Mark Collins and Kaitlyn Stephens, and the response filed last week by Assistant Ohio Attorney General Anthony Pierson, who is prosecuting the case, before issuing a written decision.

How soon the trial will occur remains undecided, although it seems unlikely that it will be held this year.

McIntosh conducted a brief hearing Wednesday morning to get an update on the progress of the case from both sides.

Coy, who is free on a $1 million bond, stood between his attorneys during the hearing, but did not speak.

The judge set the next status hearing for Oct. 4, when he hopes he and the attorneys can agree on a firm trial date.

Collins said after the hearing that a trial almost certainly will not occur until sometime in 2022.

Because court operations slowed to a crawl during the pandemic, there is a backlog of unresolved criminal cases, and defendants who are in jail awaiting trial must get priority.

Hill, 47, was exiting a garage at a home where he was an invited guest on the 1200 block of Oberlin Drive on the Northwest Side around 2 a.m. Dec. 22, when Coy shot him.