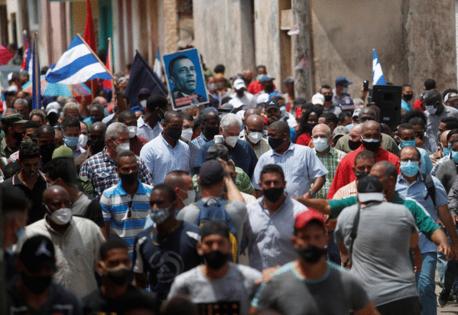 Young people, even minors, have been among the main targets.

Photographer Anyelo Troya, 25, was tried on Tuesday and sentenced to one year in prison under “public disorder” charges, family members and activists told the Herald.

“They didn’t let me see him,” said his mother, Raiza Gonzalez, in a brief phone interview.

After she learned that her son was being held in the feared “100 and Aldabo” police station on Monday, she went to look for a lawyer. But when they returned Tuesday to see him, it was too late.

“When we arrived, we were told he was being tried in a Diez de Octubre court (on the other end of Havana). We rushed, but we got there too late; he was already tried along with 10 other” young protesters, she said.

“Where is the right of my son Anyelo Troya González to have a transparent trial?” Gonzalez wrote on Twitter. “ I am befuddled by the reality that I am living in.”

Troya worked in the production of the video of the viral song "Patria y Vida," featuring members of the San Isidro artist-activist movement. The song quickly became an anti-government anthem, and thousands of demonstrators chanted “Patria y Vida” — Homeland and Life — in several cities during the protests.

“Finally, my niece Amanda Hernández Celaya was released last night to remain at home until Thursday 22, when she will be brought to trial. What is she accused of? ‘Public disorder,’” independent journalist Miriam Celaya wrote on Facebook.