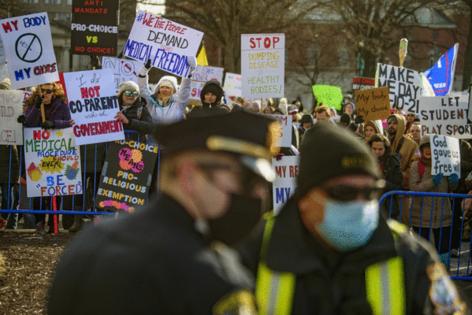 HARTFORD, Conn. — A white woman accused of spitting on a Black woman and activist during dueling protests at the Connecticut Capitol earlier this year was granted special probation Wednesday morning despite the state’s attorney’s plan to pursue a hate crime charge against her.

Yuliya Gilshteyn, 45, was granted accelerated rehabilitation, a special probation program for first-time offenders, and ordered to complete 100 hours of anti-hate curriculum over the next two years. If she successfully completes the program, her charges, including a felony hate crime of intimidation due to bias, will be dismissed.

Gilshteyn was captured on video shouting “all lives matter” and spitting on activist and Power Up Manchester founder Keren Prescott during competing demonstrations on the Capitol grounds while state lawmakers were sworn in on Jan. 6.

Capitol police arrested Gilshteyn and initially charged her with breach of peace, but Hartford State’s Attorney Sharmese Walcott reviewed the case and upgraded the charges to include a hate crime and additional offenses, including third-degree attempt to commit assault, first-degree reckless endangerment and risk of injury to a child, court records show.

Gilshteyn apologized to Prescott during the hearing Wednesday morning, saying her attack was “completely out of character,” but the ruling infuriated Prescott and about two dozen racial justice activists who joined her in the courtroom.

“What is she going to learn walking away from this unscathed? What the judge did today was egregious and dangerous and it sets the tone for the next time.”

The case cut to the heart of the political and racial turmoil at the confluence of the Black Lives Matter movement, the conservative backlash to that movement and even the anti-mask and anti-vaccine movement that has emerged during the COVID-19 pandemic. The attack itself happened just as mostly white insurrectionists stormed the U.S. Capitol and Walcott’s decision to personally prosecute Gilshteyn signaled how seriously law enforcement would pursue potential hate crimes.

Hartford Superior Court Judge Sheila M. Prats acknowledged the political backdrop during her ruling Wednesday morning but said she did not want her ruling to send any political message. Prats also noted the severity of the incident itself after emotional testimony from Prescott, but she said that is not enough to preclude Gilshteyn from participating in the rehabilitation program.

“It is serious. It is serious to you, it’s serious to this moment we’re in,” Prats said. “It’s despicable. ... I don’t believe [Gilshteyn] 100%, because if all life mattered, she wouldn’t do that to you.”

Gilshteyn and her defense attorney Ioannis Kaloidis argued accelerated rehabilitation would be the best course of action for the immigrant and former pharmacist who home schools her children, but Walcott told Prats she could not in good conscience agree to support their application for the program.

“It is the most foul thing I have ever seen,” Walcott said of the incident. “It was absolutely disgusting ... it was unprovoked, it was uncalled for.

“I just cannot as I sit here right now say this defendant has shown over the past six months that she is committed to reeducating herself.”

Kaloidis agreed her actions that day were “despicable,” but he countered that she has always expressed remorse. He said the attack was not motivated by hate or racism, but by a serious amount of stress in Gilshteyn’s personal life and he added that she already has started counseling.

Prescott gave a tearful speech to Prats about the lingering mental, emotional and physical effects of the attack on her and her young family and Prats commended Prescott for her behavior in the face of the attack that day, likely preventing an all-out brawl between protesters and counterprotesters.

But Prescott was devastated by Prats’ ruling and was escorted outside the courthouse in tears by her supporters and members of her Power Up group. She and her attorney, Ken Krayeske, both argued a judge would not have accepted accelerated rehabilitation had it been a Black woman caught spitting on a white woman.

“If I was white, I would have gotten justice today,” Prescott said. “I ain’t gonna lie, this hurts. This is a big hurt.”