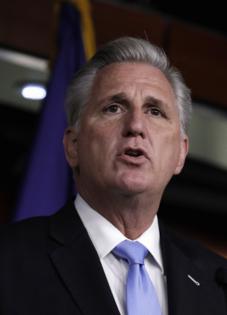 “With respect for the integrity of the investigation, with an insistence on the truth and with concern about statements made and actions taken by these Members, I must reject the recommendations of Representatives Banks and Jordan to the Select Committee,” the California Democrat said in a statement.

Pelosi said she was prepared to appoint Republican Reps. Rodney Davis of Illinois, Kelly Armstrong of North Dakota and Troy Nehls of Texas and asked McCarthy to put forth two additional picks rather than Banks and Jordan.

“I have spoken with him (McCarthy) this morning about the objections raised about Representatives Jim Banks and Jim Jordan and the impact their appointments may have on the integrity of the investigation,” Pelosi said.

McCarthy indicated on Wednesday he might pull all of his members out and not participate.

“This represents an egregious abuse of power and will irreparably damage this institution. … Unless Speaker Pelosi reverses course and seats all five Republican nominees, Republicans will not be party to their sham process and will instead pursue our own investigation of the facts,” he said in a statement.

After McCarthy announced his picks on Monday, Banks, chair of the Republican Study Committee, said in a statement that Pelosi created the panel to “malign conservatives” but added that he would work to provide Americans with the facts surrounding the attack.

“I have accepted Leader McCarthy’s appointment to this committee because we need leaders who will force the Democrats and the media to answer questions so far ignored,” the Indiana Republican said in a statement. “Among them, why was the Capitol unprepared and vulnerable to attack on January 6?”

After his selection, Jordan told Newsmax: “I want to serve because we know what this is. This is impeachment round three. This is to go after President Trump, and I don‘t frankly blame the Democrats for doing this because what else they got?”

In the wake of Pelosi’s blocking him, Jordan sent a short statement: “Speaker Pelosi just admitted the obvious, that the January 6th Select Committee is nothing more than a partisan political charade.”

Nehls, Banks and Jordan all voted to overturn the 2020 election results during the counting of electoral votes on Jan. 6, after the attacks on the Capitol by a mob egged on by then-President Donald Trump.

Under the framework of the Select Committee resolution, Pelosi gets eight picks and an additional five are appointed by McCarthy, but in consultation with Pelosi, meaning she has the power to veto any of McCarthy’s choices.

Pelosi announced her eight choices on July 1, including Wyoming Rep. Liz Cheney, who was kicked out as GOP Conference chair, the party’s No. 3 position in leadership, for criticizing Trump’s lies about election fraud.