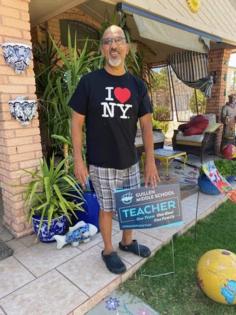 He was known for buying his students shoes and bow ties for their band concerts, his effortlessly positive demeanor and a suave personal style — “he looked like he stepped out of a different era, the 1950s,” said his niece Ruby Montana.

While Valles was singular in life, his death at age 60 in February was part of a devastating statistic: He was one of thousands of deaths in Texas border counties — where coronavirus mortality rates far outpaced state and national averages.

In the state’s border communities, including El Paso, not only did people die of COVID-19 at significantly higher rates than elsewhere, but people under age 65 were also more likely to die, according to a KHN-El Paso Matters analysis of COVID-19 death data through January. More than 7,700 people died of COVID-19 in the border area during that period.

In Texas, COVID-19 death rates for border residents younger than 65 were nearly three times the national average for that age group and more than twice the state average. And those ages 18-49 were nearly four times more likely to die than those in the same age range across the U.S.

“This was like a perfect storm,” said Heide Castañeda, an anthropology professor at the University of South Florida who studies the health of border residents. She said a higher-than-normal prevalence of underlying health issues combined with high uninsurance rates and flagging access to care likely made the pandemic even more lethal for those living along the border than elsewhere.

That pattern was not as stark in neighboring New Mexico. Border counties there recorded COVID-19 death rates 41% lower than those in Texas, although the New Mexico areas were well above the national average as of January, the KHN-El Paso Matters analysis found. Texas border counties tallied 282 deaths per 100,000, compared with 166 per 100,000 in New Mexico.

That stark divide could be seen even when looking at neighboring El Paso County, Texas, and Doña Ana County, New Mexico. The death rate for residents under 65 was 70% higher in El Paso County.

Health experts said Texas’ refusal to expand Medicaid under the Affordable Care Act, a shortage of health care options and the state’s lax strategy toward the pandemic also contributed to a higher death rate at the border. Texas GOP leaders have opposed Medicaid expansion for a litany of economic and political reasons, though largely because they object to expanding the role or size of government.

“Having no Medicaid expansion and an area that is already underserved by primary care and preventive care set the stage for a serious situation,” Castañeda said. “A lot of this is caused by state politics.”