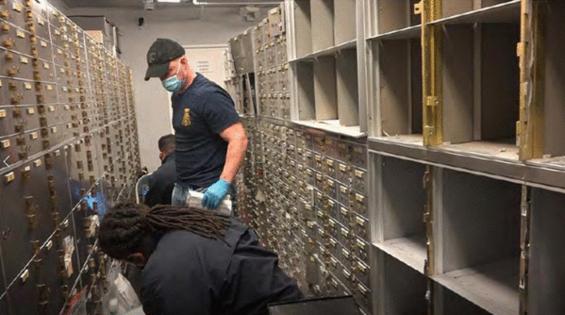 LOS ANGELES — A federal judge has blocked the FBI from confiscating some of the valuables it seized from safe deposit boxes at a Beverly Hills business, saying the government appeared to be violating the owners' rights.

The temporary restraining order issued Tuesday by U.S. District Judge R. Gary Klausner marked a setback for the FBI in its attempt to keep as much as $86 million in cash and millions of dollars more in jewelry, gold and other valuables that agents took from 369 safe deposit boxes at the U.S. Private Vaults store on Olympic Boulevard.

The FBI has claimed the owners of the cash and valuables were engaged in criminal activity that justifies the confiscation of their property. The agency, however, has not publicly disclosed evidence to support the allegation.

Citing the 5th Amendment's protection against deprivation of property without due process, Klausner faulted the government for failing to specify in its forfeiture notice the reasons for taking the cash and valuables of four box holders who filed one of a dozen lawsuits following the March raid on U.S. Private Vaults.

The FBI referred questions on the matter to a spokesperson for the U.S. attorney's office in Los Angeles. The spokesman declined to comment.

In late March, federal agents executed search and seizure warrants at U.S. Private Vaults, a company that was indicted on charges of conspiring to sell drugs, launder money and carry out cash transactions meant to dodge detection. The company has said nothing publicly about the charges but has challenged in court the government's attempted confiscation of its customers' belongings.

The warrants, approved by U.S. Magistrate Steve Kim, gave the FBI permission to seize the company's business equipment, including the safe deposit boxes themselves. But Kim explicitly barred the FBI from conducting a criminal search of the boxes' contents.

Prosecutors say U.S. Private Vaults brazenly promoted itself as a place where customers could store their ill-gotten gains. They also allege that most of its customers were criminals but have charged none of them with any crimes.

Box holders have filed a dozen lawsuits seeking the return of their belongings and court rulings that the search and seizure of their property was unconstitutional. Klausner's order was their first court victory.

"Government officials can't permanently take your property without first saying what you've done wrong," said Robert Frommer, a lawyer for the four box holders who won the order blocking the FBI's attempt to confiscate their valuables. "This ruling should lead the FBI to abandon its efforts to steal over $85 million through civil forfeiture."

Of the roughly 800 boxes containing property seized in the raid, the FBI initially designated property from about 250 for return to the owners, FBI agent Lynne Zellhart said Monday in court papers. Of the 369 boxes flagged for confiscation, the FBI has since terminated forfeiture proceedings against an unspecified number "after evaluating their owners' explanations," she wrote. The owners of many other boxes remain unidentified.

Klausner's order blocked the government's forfeiture of cash, gold and silver belonging to four box holders who sued the government, including Joseph Ruiz, 47, an unemployed Los Angeles food service worker who stored his life savings of $57,000 in cash at U.S. Private Vaults.

Ruiz, who lives near Crenshaw Boulevard and the 10 Freeway, said he obtained the money in two legal settlements, one for a car accident injury and the other for chronic housing code violations at his apartment building.

Benjamin Gluck, an attorney for other box holders suing the government, said Klausner's order would force the government to file legal complaints against everyone whose property it is seeking to confiscate and specify what criminal activity each person was allegedly involved in.

"Now they're going to have to try to prove a real case for forfeiture," he said, "and we don't think they can."