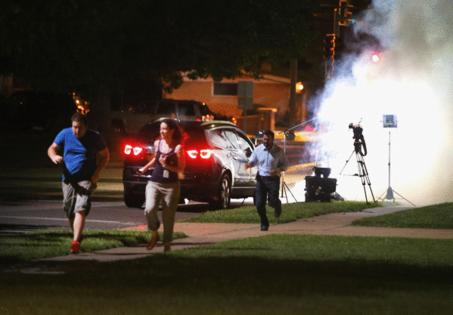 The international outlet was preparing a live broadcast related to the protests centered on Michael Brown's shooting death by St. Louis police in August 2014 when officers fired tear gas toward them. The day after, St. Charles County said that the officers had rescued the journalists. The story later changed after an officer admitted to using tear gas because he feared for his safety as bottles and rocks flew in from an area where the Al Jazeera journalists were.

Video evidence contradicted those accounts, showing no protesters in the area and nothing being thrown at police, according to the law firm Lathrop GPM.

Ash-har Quraishi, a correspondent for Al Jazeera, said Wednesday that many incidents of attacks against journalists have been by the police over the past few years.

"At a time when press freedom is under siege here at home and around the world, we must stand up for First Amendment rights," Quraishi said in a statement. "In our case, the official narrative of the police officers who assaulted us without justification or warning did not square with reality. Truth matters, and those in power must be held accountable."

Bernie Rhodes, a lawyer with Kansas City firm Lathrop GPM who also represents The Star in legal matters, worked the case for the three journalists. He said Wednesday the settlement is larger compared to previous police misconduct cases and he thinks the death of George Floyd at the hands of ex-Minneapolis police officer Derek Chauvin played a role.

"The jury's verdict finding Chauvin guilty of George Floyd's murder represents a turning point in America: jurors will no longer rely on law enforcement's version of what happened, especially where there is video that affirmatively disproves the police," Rhodes said in the news release.