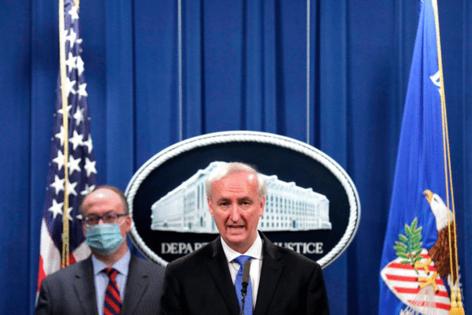 WASHINGTON — Ken Cuccinelli, who did the No. 2 job at the Homeland Security Department under President Donald Trump, was looking at a corporate opportunity after he left the administration when the work was suddenly pulled.

“They just decided they didn’t want Trump people,” said Cuccinelli, who declined to name the company. “It was just flat out — you can call it Trump discrimination.”

The revolving door is as much of a Washington tradition as National Mall fireworks on the Fourth of July — people hold prominent government positions and then step into lucrative and often prestigious outside roles. More than 80% of top lawyers in Trump’s administration have landed somewhere since he left office, even if their roles are part time or not their first choice, according to an analysis by Bloomberg Law.

But the Trump lawyers have been more difficult to place than those who served in previous administrations, particularly if they were closely connected to his most controversial policies or if they lacked the experience past alumni had, said Lauren Drake, a partner at search firm Macrae.

Several companies and law firms distanced themselves from Trump after the Jan. 6 riot at the U.S. Capitol. Corporate law firm Crowell & Moring called for Trump’s removal from office and urged others to make the same demand. Law firms Morgan, Lewis & Bockius and Seyfarth Shaw dropped Trump and his businesses as clients.

“I don’t think anyone coming out of the George W. Bush administration was told, ‘We can’t hire this person,’” Cuccinelli said. “I’m sure Jan. 6 made it that much worse than it ever would have been.”

Attorney General William Barr, Jeffrey Rosen — who ran the Justice Department in an acting capacity after Barr left — U.S. Trade Rep. Robert Lighthizer and White House counsel Pat Cipollone are among those who have yet to resurface with full-time jobs.

Barr will decide on his next career steps after he finishes writing a book, Bloomberg Law reported, citing a person familiar with the matter. It’s not clear whether Rosen, Lighthizer or Cipollone are actively seeking full-time jobs. American Compass, which founder Oren Cass calls a “flagship for conservative economics,” announced Thursday that it added Lighthizer to its board.

It’s not uncommon for some government officials to be jobless six months into the next administration, whether that is because they can’t land a position, are not actively looking or have retired.

When legislative sessions ended last year, governors and state lawmakers were braced for a prolonged recession caused by the COVID-19 pandemic. They’d frozen hiring for government jobs and cut funding for services such ...Read More