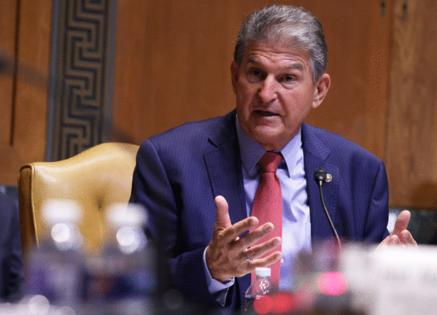 Manchin is the only Senate Democrat who hasn’t signed on to the Senate version of a sweeping overhaul of election laws that Majority Leader Chuck Schumer will try to bring to the floor next week despite a lack of any Republican support. With the Senate split 50-50 between the parties, 10 GOP votes would be needed to end a filibuster under Senate rules even with Manchin’s backing.

Manchin released on Wednesday dozens of proposals that he could support in a compromise bill to address voting rights, ethics and campaign finance. Some are likely to appeal to Democrats, such as minimum standards for early voting, a ban on partisan gerrymandering of congressional districts and a federal holiday for election day. But the proposal also includes voter identification requirements, which generally are opposed by many Democrats.

“A good voting bill has to be accessible, it has to be fair and it has to be secure,” Manchin, of West Virginia, told reporters. But he again said that any changes to election laws have to be bipartisan, adding that he didn’t know whether his proposal would make the legislation any more palatable to Republicans.

Schumer has said he may make modifications to the proposed overhaul before bringing it to the floor for a vote. A spokesman for Schumer didn’t immediately respond to a request for comment on Manchin’s proposal. The House already has approved its own version of the bill.

The Senate bill, known as the For the People Act, S.1, is a high priority for Democrats in the face of efforts by Republican-dominated state legislatures — spurred in part by former President Donald Trump’s false claims about fraud in the 2020 election — to enact ballot restrictions. It would set national standards for election laws, including no-excuse-needed mail-in voting and automatic voter registration, require additional campaign finance disclosures and impose new ethics provisions for all three branches of the federal government.

Among items in Manchin’s proposal: free U.S. mail for absentee ballots, cybersecurity standards for election vendors and the counting of provisional ballots regardless of which precinct they are cast in.

Manchin also backed new campaign finance disclosure requirements, limits on lobbying for foreign entities and disclosure and divestment rules for the president and vice president, including the disclosure of tax returns.

He also proposed a series of changes to separate Democrat-drafted legislation called the John Lewis Voting Rights Act that would re-establish the Justice Department’s ability to require some states to get pre-clearance for changes to their voting laws. Such reviews were ruled unconstitutional in 2013 in a Supreme Court case, with the court ruling that the formula used to determine which states could be subject to review was outdated.

In contrast with the act named after the late Representative Lewis, Manchin wants to limit the attorney general’s ability to deem a voting rights violation without a court finding and doesn’t want a state’s participation in a consent decree governing voting rights to be a basis for required pre-clearances. He also says there must be “clarity” on how states and localities exit from pre-clearance requirements.

Manchin’s proposal avoids some of the GOP’s biggest complaints about the massive overhaul passed by the House and backed by the other 49 senators who caucus with Democrats, including public financing of campaigns and changes to the makeup of the Federal Elections Commission.